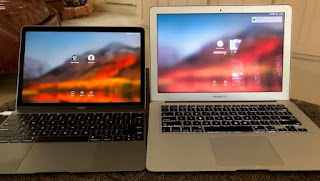 I alluded to it the other day when I mentioned my 'e' was not functioning properly. One must hit it 3-4 times before said letter would appear.

As it was, before this I was debating just having the battery replaced, as I couldn't keep a charge longer than an hour. So continually it remained plugged in.

Some of the keys identifier has been worn away. If you weren't familiar with a keyboard, you'd have been screwed.

Still, my MacBook Air lived a long life. It was almost 7 years old, and came my way from being robbed and having almost our electronics stolen.........then replaced. It served me well.  If nothing else you got 2,762 blog posts from it - including the vlogs.  .....and yes, I did the math.

And since I did the math, it comes out to paying about $0.39 / day for the computer. That's less than Sally Struthers' plea to help feed folks in the third world.

On Sunday, I ventured up to Apple to replace. They didn't have to sell me on anything really.  I knew a MacBook Pro was not on my list. If I truly used a Mac for my work, I would have, but I just use it as my computer when I log in remotely. This is not my last job, where I lived on that one. So it really came down the the MacBook and the Air.

The Air had an inch bigger screen, but weighed almost a pound more. The MacBook is a scant 2.03 lbs.  I eat more than that at dessert.  The Air I had wasn't really that big, but when you look at them side-by-side in that pic, it looks ginormous.

Oh - I went with the MacBook.

There is no wasted space here. That 1/2" you have at the side of the keyboard of the Air is gone. So are the ports. I have two:  one of headphones and one for power.  There is no supported USB port, which might be problematic, but we will see.  There are ways around that.  But I don't use USB that much anymore.

The screen is amazing. Or at least really nice. I like the keyboard a lot. But I'm finding set-up to my Mac has less than intuitive. 710 is my IT guy and he's struggling a little.

My desktop, contacts, calendar and documents came over immediately.  My documents have not come over. Nor have some apps.  Also missing:  all my photos.  Oh - and my music. Well, 97.65%.

Purchased iTunes music from 2017-present shows. Anything before that does not. Nor does the other 16k songs from my liberry. I'm trying to work through that without having to go to the 'Genius' bar. Alas, I fear that is in my future.

I have zero need for my old Air.  Gazelle will pay me $250 for the old one.  They don't know the battery is shot and the 'e' doesn't work.

Email ThisBlogThis!Share to TwitterShare to FacebookShare to Pinterest
Labels: Apple

I converted from Windows to Mac in January, and even bigger conversion. Anyone who says Mac is simple and intuitive to set up, is nuts.

I hope it works well for you.

Congrats! I think you made a great choice.

But also keep an eye on tomorrow's Apple's annual WWDC conference; they often announce new hardware so you might see something you like even better and return the model you already have.