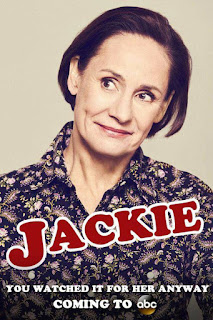 First off - I have to hand it to ABC / Disney for cancelling Roseanne.  I mean, they should have done it because it was so poorly written and acted (full disclosure: I only saw the first episode), but I'll take on the racist tweet thing too.

By all accounts, it was a 'hit'. Allegedly 17 million viewers per week.....on network television. That's no small feat in the time of streaming.  I figured with the advertising dollars allegedly pouring in, that ABC would look the other way.  It's not like they didn't know their star and how she acted and the things she wrote and in which she believed. I mean...........tick tick tick........

It gets better though - TVLand, Paramount and others are pulling the Roseanne re-runs. Good for them.

Secondly - who knew that Tom Arnold would actually be the funny one in that 'family. C'mon - you know you quote his Austin Powers lines about the 'show that turd who's boss' and 'how about a courtesy flush'.  Admit it.

I'll be honest - I saw the tweet about Valerie Jarret, but I don't why it appeared in the first place. Has anyone even heard her name since Obama left office? And can you name one thing she actually did while Obama was IN office?   No.  Me neither.

Barr isn't very timely - unless Jarret did something of note recently.

I'm sure there is Twitter / right wing press fall-out. I'm sure someone is whining about "1st amendment'....blah blah blah.  She can say whatever the fuck she wants - and did, I might add. It doesn't mean there are not consequences.  Do the Dixie Chicks ring any bells for these people?

And if I remember my recent history - 'free speech' in the form of silent protests at NFL games were doled out punishments - and I'm guessing the same folks decrying ABC's decision are the same who were for the NFL punishment.

They won't see that.  They don't see it. They never do.

Barr also claimed she was leaving Twitter - and maybe she is, but her account isn't deleted, so........I don't think we've heard the last of her.

Nor do I think BLOTUS will be quiet about it either, as he'll see it as an affront do him.....somehow. And maybe this is about him. Maybe, just maybe, people are not going tolerate this racist shit anymore.

In a sick, twisted kind of way, I'm ok with hundreds of people being out of work due to her.  I'm glad Wanda Sykes quit before ABC quit Roseanne. If she was a friend or colleague of Barr's, maybe, just maybe, this will strike a chord with Barr.

As for the gaffers, craft services, camera men, editors, actors, musicians, publicists, show runners, directors of lighting, writers, etc. Too bad. I get for some of you it was just a job, or a paycheck. But you knowingly hitched your wagon to someone who is a bigoted person - who says nasty things and then faux apologizes......sometimes.  And some of you wrote those horrid jokes that appeared in the first episode.

But if BLOTUS wants to tout being a job creator, he can also then be credited for being a job destroyer.  Maybe, come November, some of his other 'friends' and supporter will be out of a job too.

never watched either incarnation of her shitshow. never liked this fat white cunt. her agency told her to take a hike. bitch can FOADIAF!

I liked the original show but steered very clear of the reboot since it was well known she's a crazy Trumper by then.

She's still tweeting and blaming everything on taking Ambien. She said she was leaving Twitter, when, next year? She said she didn't mean to tweet that horrible tweet about Valery. All lies. She's trying to cover her fat ass with lies and people are seeing through them. She cost people their jobs. Does she care? F*** NO! She only cares about herself just like that Screaming Carrot Demon in the White House. It will never change until we get him out of there. VOTE BLUE!!