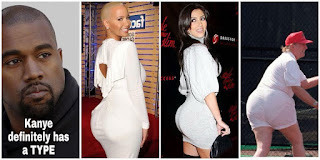 I'd ask: "is there anyone dumber than Kanye?", but I've asked that question before of his butt boy, BLOTUS.

Or is Kanye the butt boy?  I get confused on these things. It actually sounds like lately they flip-fuck.

I mean, other than Frederick Douglass, has BLOTUS every really mentioned a black man - I mean, that wasn't the "loser", Barack Obama?  Maybe Ben Carson.

I'm not sure if Mr. Kardashian's comments on slavery being a "choice" for the last 400 years or his unwavering unexplainable support of one of the move vile human beings on the planet is more disturbing - so I'm just lumping them into one pot.

Not to mock folks with mental health issues, but Kanye is cra-cra. Apparently when he 'snapped' a while back, and was "under observation", I don't think the doctors did much to fix him.


BLOTUS aside, the insanity of his slavery comments to others are just business as usual - and yes, I'm looking at you Adidas ("Kanye is very important to our strategy"). Or the rappers T.I. or Chance the Rapper (no, I don't know anything they've ever done) who think he should be given a chance and perhaps he's just misunderstood.

Personally, since slavery was just a choice, perhaps Kanye can help pay back any reparations and all those acres and mules that were given away - by choice.

I'd LOVE to speak with this muthafucka's ancestors and see what choice THEY had about coming here. dumbass pimp!

The idiot seems to be bi polar, and has gotten worse with the death of his mother. I say idiot, because he refuses to take his meds. That is one sick puppy and I've never understood the "genius" label. He's certainly no Stevie Wonder! How appropriate, the Stable Genius playing footsie with the Unstable Genius.

I put Mr. Kardashian in the same category and Mr. Baio. That category would be “Has been that is desperate for attention.”