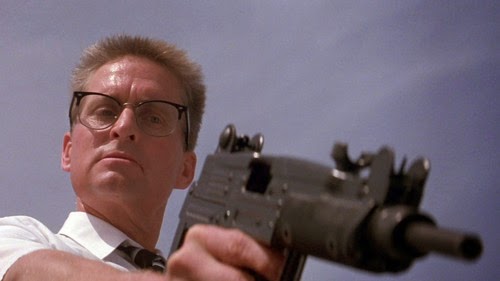 I was Homer Simpson on Friday.

As Homer once tried to buy a gun, he was told there was a five day waiting period. His response? "But I'm mad now!"

I get that I don't really believe in guns for protection, but I might have needed one on Friday. I'm guessing the guy trying to run me off the road and tailing / chasing me through three consecutive cities probably had one  - or more.

Oh yes. Road Rage is apparently a real thing and not one of those things you read about on CNN.com.

Mr. Asshole (see, I'm using a title, as a sign of respect) ran a stop sign, almost hitting me. I laid on my horn, part as a warning, part as a 'hey, you asshole' announcement. And I did not lay on the horn for an indeterminable time frame, which can happen. So I wasn't being that big of a prick about it.

The Mr. Asshole decided to go 3 mph....giving me my punishment. At the stop light, he could have turned right on red, but opted to sit it out. I opted not to honk again, just because I knew what he was up to.

Upon finally making the turn, he straddled the two lanes of traffic we were in, until he determined which one I picked, then he got in front of me - continuing his 3 mph game. Well played, Mr. Asshole.

Me, being impatient and not thinking this through, decided to get in the other lane and go around him - which it turns out, was exactly what he wanted, as now he was right behind me.

As we are at another light, at one city limits, I see him, via my rearview mirror, giving me every conceivable hand gesture and mouthing what I'm guessing were major expletives. It's the one time I really needed Marlee Matlin in the car with me - though I could guess what he was saying even if I couldn't read lips.

Ruckiry (not Jon's boss), there was a minivan next to me, so he couldn't pull up along side of me and I stayed at the same speed as the van to limit access to me.....until the van made a right, leaving the lane open next to me.  Fudge. So Mr. A pulls up - and while I never looked over, I could hear him yelling. My windows were up as was my radio, but I could hear him. I'm guessing never acknowledging his presence made him more and more angry.

We were approaching another intersection where we would be parallel at a red light - me in the left, him in the right. In a complete dick move on my part, at the last minute I got in a newly opened far left turn only lane, cutting off the person getting in that lane, but this was for survival. What I didn't expect was for the Asshole to cut over TWO lanes, cut off the person I just cut off and now was back directly behind me.

I knew I had a big problem now.

Immediately I realized had I stayed in the other lane and gone straight I was a mile from a police station. But now I was fucked and headed in a different direction.

I had Siri (best use ever) call the police department. They stayed on the phone with me, but I was so flustered, I could barely describe what I was driving or where I was. The other driver now along side of me YELLING for me to pull over now. As if!  The police department sent out a call about road rage and my location - and kept asking for updates. I told them I was approaching a certain road and honest to g-d, they go, "oh that is now out of our jurisdiction" {fuck me!} and can I get to the Shaker Heights Police Department.

Again, being flustered, I wasn't sure where it was, though I knew exactly where it was - 3.5 miles away. This guy wasn't going to let me go 3.5 miles.

Beachwood police at least patches me through to Shaker. They told me they'd have a cop waiting for me in the parking lot , but I wasn't even thinking why they weren't sending one out. Someone had to be on patrol closer by.

I wasn't sure how I made it into the right hand lane, but I was. And then I realized I was going to come up into a major construction zone where I'd be trapped in a funnel of traffic, stopped for 10 minutes to get through a light. I was about to be fucked - and not in a good way.

With this guy on my left, I opted to slow down to 20 mph. I started letting a sea of traffic back-up behind me - and still trying to hold a conversation with the police. Mr. Asshole slows down too. And there is a bunch of traffic around him.

But with no signal (duh!), I make a sharp right onto an upcoming side street. No way for him to get over and now there are 7-8 cars that were behind me blocking any possible access to that street - and he was forced to keep going due to the traffic behind him.

I actually found other side streets and started going in the opposite direction of which I was headed, just to throw him off had he found a way on to a parallel street. To say I had heart palpitations would be an understatement.

The police asked if I wanted to come in and file a report, but I wasn't sure what good it would do, but they told me if I changed my mind to do that. At every intersection on the way home, I was hyper-vigilant at scoping out any cars looking like his (I had the make, model and first three digits of his license plate).

It took me another 60 minutes to calm down after getting home.

But yesterday, I decided to visit Shaker Police to see about filing that report. He had clear access to my full plate, since he followed me. And then I thought, maybe if he was a serial Asshole this could be just in his permanent file.

I will be calling SHPD on Monday to talk to someone more official than the guys behind the counter.

They not only discouraged me from filing a report, they told me they wouldn't take it. The "chase" started in another city. They didn't seem to care that the SHPD dispatcher told me to come in and file. They didn't care that I had the first three digits of the six digit plate.

"That can't identify him", they said. I was livid. I said, at the very least, you can narrow it down to 999 vehicles since you know anyone starting with GHH. Add to that which are black Honda Civics, that should narrow the search quite a bit (though I wasn't actually looking for them to go out and get the guy).

I was actually more upset when I left the SHPD station yesterday than I was after that chase on Friday. And I let them know, "you two are absolutely fucking useless" and left the station. Then sat in my car for 10 minutes before going home.

So while there are bad cops out there (yes, you know all the stories) for being too aggressive, there are seemingly just as many for not lifting a finger.

scary. could you file a report in the other 2 jurisdictions? and does someone have to be killed before the SHPD does something?

Scary, be careful there are a lot idiots out there.

I live in Denver. In the last few weeks there have been several road rage incidents, some involving guns. Most of the incidents ended up in accidents and drivers getting arrested. It’s become a serious issue here.

Yikes
I am glad you have the yoga to help you not succumb to it all.

So, let me get this straight: *you* escalated when you honked at him at the stop light, right?

no. apparently * I * escalated when I honked as he ran through a stop sign and almost hit me.

I might have, when he was going 3 MPH ahead of me, turned into the nearest parking lot and gone back the other way, while calling the police on my phone and giving them the license number.

But, had he somehow slowed down and pulled alongside me cussing and fuming, i would have blown him a kiss, thereby escalating the situation myself.

Jeez, that is scary. Glad you got away without a physical altercation. Sucks about the lazy cops.