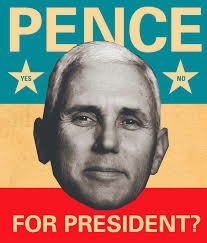 Mike Pence better hope for a second term as governor (or to go back to doing whatever he was doing before this job), because aspirations of holding the job in the White House have slipped through his fingers.

There is no coming back, politically, from SB 101.

Actually, since Marc Rubio, Jeb Bush and Teddy Cruz threw their support behind Pence - where does that put them (or him), now that Pence is backtracking?

I didn't see (nor could stomach to watch) his press conference yesterday. Add to that any of his time on FOX (as if I'm ever turning them on), or what ever Sunday political shows he deemed worthy to appear.

Honestly, I don't know what is worse -

B. it wasn't intended to promote discrimination, but they didn't clarify the bill as such (because all the chatter before signing didn't foretell of this?).

C. that they never thought it through enough (so says Indiana Speaker of the House) that there'd be this kind of reaction.  (see parenthetical B)


Each scenario makes them out to be bigger rubes than previously believed.

They are just the elite Eagletonians in a Pawnee world.

And A, isn't exactly true, as Indiana Speaker of the House said this back in January:

So, you know: fuck them.


And for a second - but just a second - I felt bad about the concerts that were canceling, leaving fans out in the cold. I almost felt bad for all those workers and supporters of businesses not expanding, or possibly leaving the state.

But then I thought: well, you voted for these assholes, most of them more than once. And if you didn't, there is such a thing collateral damage. Sorry, there just is.

Just like the LGBT community who more than likely didn't vote for them, but are being excluded at every turn. Just like women are with their healthcare choices in IN. Just like the kids are with the decimation of the education system in that state.

It's a reap / sow situation.

Pence still thinks the bill, as is, is fine...and that it is a "perception problem" - and in a way he is correct. It's just his perception that is the problem. Still, he is yellow as they come, because if he truly believed in what he signed, without sending it back for revisions in the first place, he'd stand behind that and go out to change the perception.....if that were possible.

Don't get me wrong, I don't think he should stand behind it, but it shouldn't exist to begin with. He is incapable of stopping a wave.

So now the plan is to go back and retract and clarify. Which is great - except, then why do you need a bill at all? Your intended purpose now is moot, so why not get it off the books entirely? But repeal isn't really on the table.

Yes, Gov. Pence.....your road to DC has just taken a major detour. You are now the face of the GOP - and I'd say for better or worse.....but for you it is worse. There is no way in any other election - even for dog catcher - that this will not come up again and again.

I'd say "April Fools", but this isn't a joke......and no one, including yourself Mr Pence, is laughing.


(though Arkansas seems not to read or watch the news as of late. asshats.)


Song by: John Mellencamp
Posted by Blobby at 12:01 AM

If it all weren't so hateful, so hurtful, it might actually be comical.

I mean, who ever foresaw the phrase...

"Can you bake a cake for my same-sex wedding?"

... become a rallying cry, and a death knell of sorts, to the anti-LGBT stance of the GOP.

I giggle as I watch the Jebs and Teds and Marcos stand behind a law that is already being RE-clarifed, and perhaps rewritten, or out and out killed.

I chuckle at Mike Pence who is watching his shot at the White House, even in 2020, being dismantled over a slice of cake, or a bouquet of flowers.

Except for that hateful-hurtful stuff, I'd be giggling.

With all of the marriage equality traction gained in the last year, I really thought we were beyond this as a country. Apparently not.

Fortunately, or at least it seems, Walmart of all places weighed into Arkansas yesterday and they are changing their bill. It seems these bills are deemed necessary by the GOP so they can report back to their supporters that they are protecting their rights but the majority of them only restate the federal law in place and are well, ahem, redundant. Indiana's was much more far reaching than the federal and Arkanas is now said to be toning theirs back to the federal like other states.
I am not a professional political analyst so I may be off here but it's what I understand at the moment. It seems all so childish. Oh wait... It is.

Late to the party as I always am. Living in Arkansas, it was "great" to see the places I won't be patronizing in the future at least being honest about their stance.

I actually tweeted at some point wondering what WMT would do, if the bill passed (as it originally was), when all it's vendors quite sending people to Arkansas to do business. Or would they?