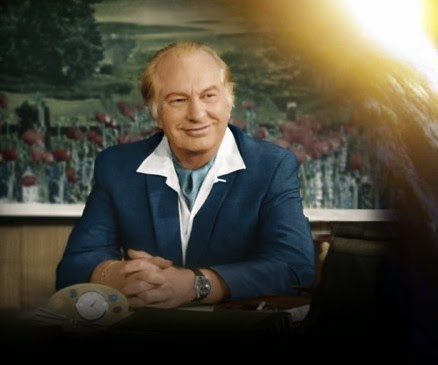 Let's say that 10% of the HBO documentary, Going Clear is accurate.

L. Ron Hubbard and the Church of Scientology is totally FUCKED UP.

And I'm being kind.

I'm guessing the ground that they cover on truthfulness is a much much higher percentage of truth, but again, my kindness shines through.

Perhaps Scientology is not more fucked up than Catholicism and Judaism. It's newer. It's possibly more odd. But there are just as many stretches in reality and faith.

Is eventually worshipping Xenu, a dictator of the Galactic Confederacy who 75 million years ago brought billions of his people to Earth (then known as "Teegeeack") in a DC-8-like spacecraft, stacked them around volcanoes, and killed them with hydrogen bombs so much different than worshipping the product of a virgin birth who raised people from the dead, walked on water and was a honey-blond haired white man from Israel?

Ok, it is a little different.

And in Christianity, the Inquisition were full of weirdos who did horrible things in the name of Jesus. So I suppose forcing some members to work 30 hours, then three hours of sleep is cool. Keeping some key Scientology members hostage in 'the hole' for year(s) at a time or paying workers $0.06 - $0.40 an hour (in the name of religious freedom, of course) is on the up and up.

As I watched the two hour documentary, which seemed longer, I was surprised that it wasn't until the last 20 minutes, that the word "brainwashing" came into play - and then, only once. It was clear to me in the first seven minutes that this is what it seemed.

Those suckers in Jonestown were lucky bastards to drink the kool-aid and die. Scientologists are strung on forever, bilked of all their cash (to get to 'the next level') so they can see LRH's vision.

And while I'd like to dismiss this organization, but they went up against the FBI and IRS and won. While I think they are to be messed with, it is not to do it lightly.

As fucked up as LRH was (and creeeeeeeepy, even his speech pattern), his successor, David Miscavige, makes Jim Jones seem like Sweet Polly Purebred.

While Going Clear gave better insight into Scientology, a lot of this stuff has been known for a while. But the depth of it - and what they go to - is unsettling at best.

I get while the documentary was kind of a insight piece and kind of a take-down piece, they certainly didn't get into dirt, which they could have......and maybe should have.

It does not seem uncommon for Scientologists who question anything to go to Scientology prison. Not just banned from the 'religion' (oh yes, quotes), but locked away. It seems Miscavige's wife has not been seen in over seven years. But allegedly, she's working elsewhere in the world.

Others are broken down mentally or physically. It is just insane.

What I would give to hear the likes of Katie Holmes and Nicole Kidman (neither ever became Scientologists) really talk about their time with Tommy Cruise and his 'church'.

Kidman seems to do ok on her own, so I doubt any financial incentives to keep her quiet need to be in place - and the 'church' has already made her adoptive children 'disconnect' from her - so it's not like she's losing any relationships.

Holmes, well.....yeah, she did Batman Begins, but has she really had a real paying job since Dawson's Crack?  She might need to keep her pie-hole shut to keep living in the style to which she's accustomed. No wonder she ran out in the middle of the night.  Good for her.

And while they're not huge names, I'd like to her what Lisa Marie Presley has to say, and even Leah Remini (who allegedly left after questioning where Miscavige's wife was). Lisa Marie might not speak out, as her mother is still a member - and it is quite possible she would no longer be allowed to speak to her?

The common theme amongst the people who left the 'religion' is embarrassment. They feel silly for being in there for 20-30 years, unaware of the perception of what was going on. Hell, most of them, even in the electronic age, never Goooooooogled 'Scientology' and when they did after they left, were appalled at what they learned.

I have to go back to 'brainwashing'.

But more incredulous, are how the folks who leave are harassed, followed, filmed, wire-tapped, etc, including (or especially?) Miscavige's own father.

And the websites of ex-members could seem vengeful, but I'm not sold on that. Tony Ortega and Mike Rinder were fairly high up in the organization and it is hard, even for Scientology, to wipe out an electronic footprint.

Yes, SNL did a take off on the music recruiting video that Scientology did - and oddly, it is not that far off.


Still, if you have HBO, it is a very interesting, if not unsettling, two hours. I'm just amazed at what people need in their lives to take this in as reality, but I think we all know what P.T. Barnum said.

Song by: the Innocence Mission
Posted by Blobby at 12:09 AM

Do you know why there aren't any jokes about the Reverend Jim Jones?

Because the punchlines are too long.

We have it on the DVR.
I just cannot fathom being part of a "religion" ... and I could end that sentence right there ... that tells you to disown, ignore, disconnect, from friends and family if they leave your "church."

I've never paid any attention to Scientology other than the church they have near me is architecturally quite nice, a 1940s moderne meticulously maintained in its original state. Maybe I'll google the term....

Considering how many sci-fi books LRH wrote, one has to wonder why the scientology stuff isn't seen in the same light?

Then again, I do know a lot of people who worship Star Trek....