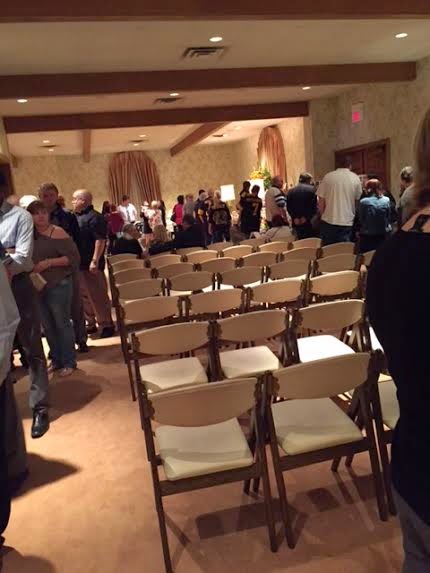 I make no secret that I read the obituaries daily. Well....when we get a printed paper. So three days per week, I don't peruse them on-line. I'm not that motivated.

So I missed the one where our former CIO up and died last week. I got an email from a former colleague and then sought out the obit. There was little information, other than calling hours and funeral services.

I liked Chuck enough to stop by the calling hours. I had no intention of going to a service. It turns out a lot of people opted for calling hours. I was stopped by 30 minutes into the two hour block and I was back of the line, which was at the door. I parked like a block away. No room in the lot.

I saw a few people from work - as it was a Sunday afternoon - but no one else I would know. No reason I should. I really wanted to sign the book and leave. But unlike other funeral homes, the book wasn't in the waiting area. Noooooooo.........the line snaked from the door, through the waiting area into the room - around the perimeter. And only on the third wall, was "the book".

And I looked around. A lot.

One of my first observations that it was going to be open casket. You couldn't tell that from the entry way. I'm not fond of open caskets - people will say how good or natural the person looks, but they never do.

Secondly, I was way overdressed.

Actually, I was not. I felt I was under dressed as I wore dress pants, dress shirt and a sport coat. I didn't wear a suit or a tie. Please enlarge the image. Notice the girl with the off the shoulder number, bra strap showing and her told open toed flip-flops.  My lord.

I'd like to say she was the extreme, but she wasn't.

I stuck around a bit to chat with some people from the old office whom I don't get to see much.

As odd as it is to say, I liked my father's service much more - as much as anyone can like those kinds of things. There was no 'receiving line' - which just seems odd. It was much more of a casual greeting kind of thing. And no dead body on display.

Anyone who tries to say that 'we should celebrate their life' is kidding themselves. I'm not saying we shouldn't - I'm just saying it rarely happens (though my cousin Billy pointed out to his wife how much I was laughing during Shiva for his father.....but his father would have liked that).

It will be a hard habit to break, but I have to stop reading the obits. More and more I see people "my age"appearing in them. It is borderline depressing.

Though not as depressing as Chuck's calling hours.


(and yes, I know it was tacky of me to take a pic at the funeral home, but at least my bra strap wasn't showing!)


Song by: Lucinda Williams
Posted by Blobby at 12:08 AM

I too read the obits daily, hate open caskets, and don't like the small talk you are supposed to make during calling hours.

Maybe they were her Sunday Best Flip-Flops?

We plan to have quite the comical side going at Father's funeral, as he will like that.