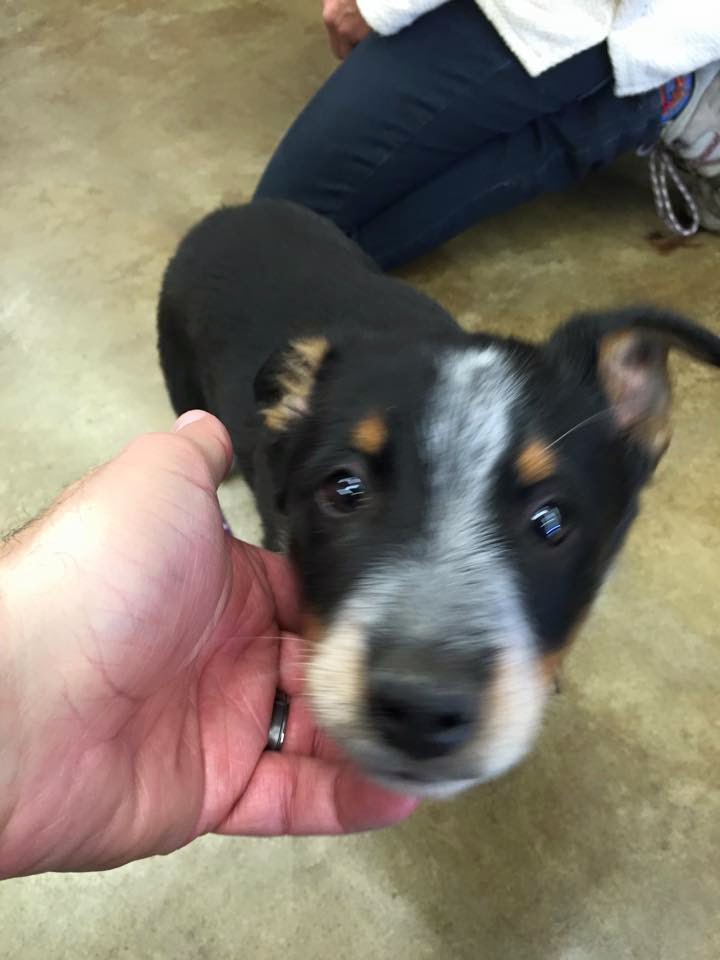 I fall in love too easily.

I don't watch movies with pets as a central character, because even if it does end well, the pet is put in danger - even in fake movie danger - and my emotions get all manipulated.

But I do stop by the adoption places at Petco and such. Just to see. And invariably I fall in love.

So the other day, I'm at Pet People to buy Mr. Pete some treats - which they didn't have what I wanted. But while there, a woman carries in 8 week old Heffley, the cutest cattle dog anyone has ever seen.

It's not hyperbole if it's true.

He is / was a barn dog. I don't know what that means exactly. I do when it comes to cats, but not dogs. But he had two brothers and they would attack Heffley. So this woman is fostering him for a few weeks until he is ready for adoption.

Yes, clearly I got the story from her, as I tried to bond with Hef. (Apparently, "Heffley" comes from Diary of a Wimpy Kid).

Hef is shy, probably reserved due to the abuse his brothers gave him. And Pet People was his first outing other than the foster mom's home. She used to work at the place we got Sophie, so I know she knows how to treat animals.

But I snapped this pic and sent it to 710 before I even left the store. I never thought I'd want a puppy, but he will at a rescue center in a few weeks. And according to the woman (and Dith), he's wicked smart. Dith says cattle dogs are scary smart.

The foster mom says in three days Hef was pretty much house broken. I'm sure not 100%, as he is only 8 weeks old, but still.....a good sign.

If I'm being 100% honest, I think about the need for a transition dog. I think we have Petey for a while longer, but having another dog in the interim isn't such a bad idea.

710's birthday is coming up. I told him I'd get Heffley for his birthday.


Song by: Ella Fitzgerald
Posted by Blobby at 12:08 AM

Too cute! Puppies are a lot of work, man. But, once they've trained you, you love them even more. ;)

how would petey and sophie react to a new furkid?

And I'm with you on the Will Smith movies.

I'm verklempt.
And getting him for 710's birthday, that is so something I would do for my better half as well ;-).
So is he home with you yet?

But I'm not that fond of the name. It reminds me too much of Hefner.

We've always had two dogs at a time. It's much better - they keep each other company, and the puppy will keep Petey young.

With great brain power comes great responsibility, Blob. If you get this puppy you are going to have to teacH him how to live with you. He's going to have the energy of a Thousand suns, and if you don't channel it he's going to rip your house to shreds And make you crazy. He's not going to be the kind of guy who will just sit around, he's going to want constant action. You are going to.have to train him. I know you don't like that concept, but if you don't the puppy will be miserable, the family will be miserable. You're going to have to get him out into the world meeting new people and dogs, exposing him to novel situations every day. Cattle dogs can get weird and spooky, sharp and reactive, but proper socialization can stop that. Please read "Perfect Puppy in 7 Days" by Dr. Sophia Yin before you bring him home. I love you guys and want everyone to be happy.

I hope you can keep him; you convey such joy about him.