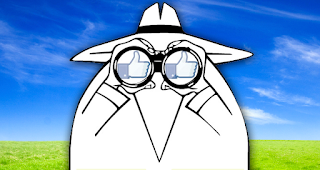 I suppose I should be upset at Facebook, but why would I?

Is there some shock that anyone's internet data isn't being looked at and mined?  Didn't we go through all this with the NSA and cellphones / smartphones just a few years back?

Everyone sells your data. Everyone.

So Cambridge Analytica knows I like dogs, my friends, hate BLOTUS and likes to make fun of Mike.

Do your worst Cambridge!

I'm not one of these people who click on those side ads or news articles. I try to avoid the click-bait and quizzes that people always seem to take, though I really don't know how correctly identifying the character of Knots Landing is really telling marketers, political machines what I'll buy or who I'll vote for.  Is Nicolette Sheridan a Green Party supporter?

Listen, if they can determine I won't vote for that Orange Fuck, by my posts, then it was billions of dollars of consulting cash well spent, I say!

But honestly, every food company knows what I purchase at the store and how frequently. Every bank, restaurant, shop and hotel/airline knows how often I travel and do their predictive modeling to see what and how much money I'll spend and where.

None of this is news.

Sure, you can drop Facebook - but I'm not sure that's the reason. Every webiste you visit, every purchase you make on-line, hell, you see reminders of those pop up in 'ads' everywhere. There is no such things as internet privacy.  You're gonna have to dump a lot more than FB to be 'secure' (oh yes, quotes).

Yes, Cambridge Analytica are heinous, and there are dozens and dozens of companies just like that - they just haven't been revealed so publicly.  Facebook?  They probably sold data. I know they did. They said they did. But their 'agreements' with companies are what they can and can't do with it - because contracts area always adhered to.

So for now, I see now reason to drop some social media, though I have never understood SnapChat.

Of course, now Mueller is looking at Cambridge Analytica (allegedly), so this isn't all bad. I'll take one more round of ammo for his arsenal.

Song by: They Might be Giants
Posted by Blobby at 12:12 AM

You know, when you take a Facebook quiz to find out which Muppet you are, or which Golden Girl you are, and the quiz asks if they can access your personal data and you click 'Yes,' and then you complain about your personal data being accessed by someone group determined to elect _____, you're a special kind of stupid.

Bravo, we should all know big brother is watching.