Another One Bites the Dust 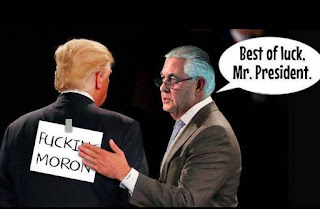 No. I didn't think so.  The question really was: "what to you so long, BLOTUS?"

Yes, people are all a twitter - on Twitter - about Rex Tillerson's firing. And how he wasn't fired months ago for {allegedly} calling BLOTUS a "fucking moron"  - as if it really needed to be said aloud.

No, Tillerson was fired {allegedly} for blaming Russia for killing two in the UK.

If the latter is true, it was just an excuse for the "fucking moron" comment - as BLOTUS had been biding his time.

While clearly I have zero respect for BLOTUS, if you take a position in his administration, you kind of should. So, if I were the boss, I'd probably fire someone who called me that.

JFC - show some integrity. Have a fucking backbone - all of you.  Any of you.

I guess if there is a shock to any of this - and there isn't - that it wasn't Betsy DeVos.  My lord. That woman makes Palin look like a MENSA member.

Just for the record, B., those two Russians recently attacked in Salisbury, England, are still hanging on in hospital, both critical, the daughter being slightly more stable than their main target. Of course it doesn't affect the drift of your post.

the dump IS a fucking moron, and so is anyone who works for him. and the russians ARE the evil empire.

Fired via a Tweet.
How presidential, er, mean girl.