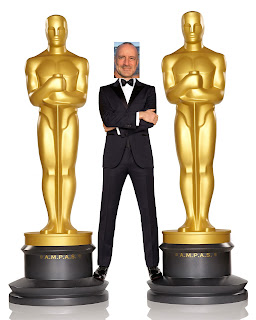 How is this even possible?

Mike and I are having our 7th Annual Academy Award Guessing Game®.   SEVEN!

He calls it the Seven Year Itch - but mostly because his scabies are out of control - nothing a little Kwell won't take care of.

Traditionally, this night has not turned out well for me.

Many of these have ended in a tie. I think I won once and well, he has prevailed more than I.  Of course, there was the infamous miscount of '14.  Mike made sound like Gore v Bush looked like little league compared to that.

I'd say maybe I can turn the tide tonight, but I'm not hopeful. While it feels like we've seen a number of these films, some races are too close. If Denzel wins for a movie no one has heard of or seen (including by Denzel himself), well, then, we are fucked.

I've only seen four of the nine best pictures. I think that is one more than Mike has. So, does this double my odds?

The wager?  Well, it used to be cookies. Then I got lazy and purchased cupcakes, though I delivered them personally with like a $83 bar tab he we racked up. This last round, it wasn't even baked good.  I know - right???  Through the miracle or electronics, Mike and his husband got movie tickets from me.  I suppose I could have a bottle of gin delivered if there is a liquor store that does that sort of thing.   ......assuming he wins. 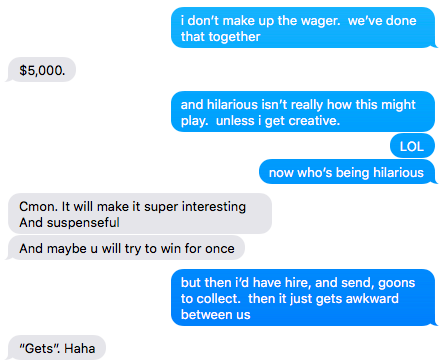 I'm not sure the amount will make my guesses better, and I don't know how many out-calls he'd have to do to come up with the dough.

Anyhoo - I did make my picks. Mike has claimed to have made his. The reality is, there is usually only a few picks that differ, so the margin is slim.  I now won't make a 'slim' joke. See how mature?


Best Picture Call Me by Your Name Darkest Hour Dunkirk Get Out Lady Bird
Phantom Thread The Post The Shape of Water Three Billboards Outside Ebbing, Missouri

I'm hopeful. Get Out or Shape of Water could spoil this.

Sirius Black - for the win.

It was just a great performance.

You loved to hate him, and then you just kind of loved him.

It really only comes down to Janney and Metcalf, but Janney has the buzz. Either are deserving, but Metcalf won't give ME, the win!

Quite possibly the toughest category of them all. I want the Big Sick to win, but I'm thinking it will go to Get Out.

Totally worth the win.

I didn't see one of these. Dart. Blindfold. Throw.

Battles, battles and more battles, so it will be one of the few Dunkirk wins.

I almost picked the Greatest Showman thingy.....because of the gays.....and Hugh Jackman (who as picked, because of the gays), but the two who wrote the song won last year, so, that isn't happening twice in a row.  ....and Disney is probably strong-arming folks up to the red carpet.

It's Disney / Pixar. The NRA of animation.  No one shall dare cross them.

oh for g-d's sake, in the movie, Day-Lewis designs dresses!

It's more artsy and with a pseudo-message.  Garden Party was cute. Lou? More Pixar, so don't rule it out.

Normally I'd say the Insult because it's the only preview I've seen of the five. But that strategy hasn't worked the best for me in the past. And if I want insults, I'll just wait for Mike to chime in on any of my selections........thankyouverymuch.

When making a lab for the Creature from the Black Lagoon, well.......you gotta be creative.

Victoria &Abdul (not Paula) was in theaters for a week, but it will go to Darkest Hour for making Oldham into Churchill.

Guns in schools hits all the marks these days, no?  Though the trailer I saw for the Eleven O'Clock seemed interesting.

Song by: Foo Fighters
Posted by Blobby at 12:07 AM

I'd like you to be right about 'Baby Driver' getting at least something, a film that deserved more recognition than it's got, but I fear the screen presence of one K.Spacey may have put the hex on it. Also bigger shouts for 'Get Out' would be welcome - and, like the audience felt more than the critics did, I did own a soft spot for 'Greatest Showman', though of course it'll be given the cold shoulder.
Best of luck on your own choices/guesses - and I'm sure you'll use your winning tickets with taste and discretion. :-)

And so it begins. As Sir Blobby likes to point out, this is our seventh go-round with the Oscars contest. Hard to believe that we started when I was just 38 years old. Time flies.

We’ve certainly had our ups and downs, but one thing’s consistent: Blobby does the lion’s share of work to make this event possible (our contest, not the actual Oscar’s ceremony). He always send me a reminder a few weeks before the telecast and he produces this blog post, which I then just have to comment on. Easy-Peasy (for me). So before any slights or insults commence, let me publicly thank Blobby for his effort here. Almost makes me want to throw the contest so the poor dear has a chance.

Like Blobby, I saw four of the 9 nominated Best Picture contenders: “Dunkirk” (bleh — couldn’t hear or understand a word of dialogue), “Get Out” (still trying to decide what I think), “Call Me By Your Name” (dreamy, loved it, should be nominated for everything, including Best Profile for Armie Hammer), and “The Shape of Water” (which I thought looked mystical and fun, but ended up being predictable and disturbingly and unnecessarily violent). So one could say that we are going into this race with exactly the same knowledge (hahah one COULD say that).

And as for the wager, it’s abundantly clear to any of Blobby’s cherished readers that he seems to be hedging a bit. The movie tickets he purchased after I won the Golden Globes contest were truly generous — a great prize! And the personally delivered cupcakes — along with one or three gin martinis (who’s counting really?) were stupendous as well. For this year? Well, maybe if I lose (hahahahaha), I’ll purchase Blobby a year’s subscription to Entertainment Weekly so he can have a full 52 weeks of research under his belt (hehe) for next year’s showdown. Or maybe we keep it simple: a round of cocktails when Blobby makes his annual trek to the East Coast for his summer getaway, which traditionally includes a meet-up at Club Cafe/Club Sashay/Club SoGay in Boston. If we’re not playing for $5,000, I might as well get a drink out of this deal. Or hey, I’m up for purchasing tickets for a local cinema in Cleveburgh. I will let Blobby make the final call on this one. It’s the least I can do (the VERY least).

I have two hopes for this year’s contest: 1. That Sir Blobby makes it to the end of the Oscar telecast. Seems every year, he peters out about one hour before the show’s over. Something about a big day at work tomorrow blah blah blah. 2. That the “Miscount of ’14” remains a historical event, not a playbook. I know that Blobby’s accounting firm of Dewey Cheatum & Howe will be carefully monitoring the ballots …. but for god’s sake, let’s get it right, shall we?

Hey — one final shout-out to Blobby (I’m feeling kind this morning.) What a terrific header image for his blog post! Why, I almost look like Armie Hammer!

So without further ado, and further wear and tear on my keyboard, here goes nothing:

Best picture: We can agree to disagree on this big prize here. “The Shape of Water” seems to be on or near the top of everyone’s mostly likely to win list, so I’ll go with the mob mentality here and predict it will take home gold. Unless Faye Dunaway screws up reading the card again.

Best Director: Guillermo del Toro. Because it’s fun to say. And because despite recent charges of him stealing the concept for this movie, he’s going to pick up the Oscar.

Best Actor: If had my druthers, it would be Timothee Chalamet — who gave a heartbreaking, sensitive, and totally believable performance in “Call Me By Your Name”. AND he learned how to play the piano AND how to speak Italian for the role. AND he’s cute. But it seems that Gary Oldman has the lock on this one, so I’ll go with Mr. Oldman.

Best Actress: I’m going “Anyone But Meryl Streep”. Is anyone else tired of seeing her in the front row of every film awards show? Didn’t see “The Post” — and won’t - but clips in coming attractions several times. Same old, same old. Didn’t see Three Billboards — and previews show Frances McDormand just being angry (I suspect that’s her in real life too)….but Blobby seemed to like it, so I will vote for Frances in this category.

Best Supporting Actress: Part of what I didn’t like about “The Shape of Water” was the Octavia Spencer character. Isn’t that the same role she’s played in every movie to date? Harrumph. I don’t think there’s any stopping Allison Janney from taking the statue home.

Best Original Screenplay: I am really torn about this one. Will it be “Three Billboards” or “Get Out”. Blobby’s going “Get Out” — which makes me think it will go to “Three Billboards”. But then again, they may throw a bone to the new guy on the block, so damn it, I’m gonna say “Get Out”. God help me.

Best Adapted Screenplay: Oh please be “Call Me By Your Name” and give James Ivory some love for his sensitive story-telling.

Best Cinematography: How about going with one I’ll never ever see: Blade Runner 2049

Best Film Editing: All the cool kids (and Blobby) say it’s going to be “Baby Driver”. But let me go out on a limb here: “Dunkirk”

Best Original Score: I’ll go with “The Shape of Water”.
Best Original Song: Attention accountants. This is where Blobby walk the fine line. Highlighting two (mind you — two) selections in his ballot. One must read between the lines and assume he’s going with “Remember Me” but one can’t be too sure. Let me say this and say it loud and clear. since none of the beautiful Sufjan Stevens tracks from “Call Me By Your Name” were nominated (he was robbed), I will go with “This Is Me” from “The Greatest Showman”.

Best Costume Design: The whole move it about fashion design, for god’s sake. “The Phantom Thread”.

Best Visual Effects: “Blade Runner 2049”
Best Animated Short Feature: “Dear Basketball”. Yeah, I played basketball once in high school. But then I dribbled on the court.

Best Production Design: Another trophy for “The Shape of Water”

I always enjoy your Oscar entries.
I haven't seen any of these movies; I rely on you to tell me the news.

What does it say about my movie going habits when the only films I've seen are the ones in the Best Visual Effects category? Blade Runner wasn't one of them and two I saw on television. Another year of not watching any awards show.

My what good taste you have. My only difference is Mary J Blige.
JP