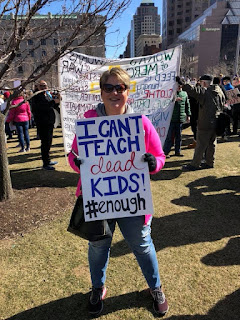 True that, lady I took this picture of.  True that.

Yesterday was the Marches for our Lives. While I didn't go to DC, that would have rocked.

Did anyone else go?

While rallies are not always my thing, I felt this one was a need to attend. We couldn't figure out what to do with Shep, so 710 stayed back with him and I went solo.

Somewhere in all of this, I forgot it was about the children.

Yes, they're our future, blah blah blah. I knew it was spurred from the Parkland shooting, but with all the adults on-board, I forgot about the kids.

It became apparent shortly after the rally truly kicked off.

But first - David and I walked up, looking for James. we speculated the crowd might be at 5,000. I think we were off, as we got more into the crowd.....and then the crowds just kept coming. Not bad for a day that was maybe 34 degrees.  Maybe. But it was sunny and blue sky.

Then the rally started. We were maybe two-thirds back from the presentation area, but with the intro, you could barely hear a word. We weren't sure if the PA system wasn't working, if there was a PA system or if the girl was just a low-talker.

The mayor got up and low-talked too, but that is his thing. Speaker after speaker couldn't quite get it together and 10k folks with no port-a-potties. My inner-Miranda Priestly came outter.....and I said to David, "It's just baffling to me. Why is it so impossible to put together a decent rally? You people have had hours and hours to prepare. It's just so confusing to me."  David got the reference and laughed.  Phew.

All but three of the speakers were high school students. Some were good. Some were not. Some were reading what was inevitably their college entrance essay, some pulled quips off of memes from the internet and forced them into a speech. One kid was clearly writing his introductions speech to his future PAC.

That said - all of them had at least a few good points (though the chick from Bryn Mawr was out of place. Hers was about education and race. I think she could have made a decent analogy if she had tried, but she didn't......make the analogy or try).

I think my favourite line from a girl who goes to public school was, "my dress code is tougher than Ohio's gun laws".  For. The. Win.

I did like the speaker who pretty much skipped the 'we will vote' to 'we will run'.  Or the girl who mentioned that their generation is the 'most education, most diverse' group in history. This can only bode well. Another mentioned how anyone taking NRA money will not get their vote.

I wonder how our elected officials were feeling yesterday. Or the NRA - though they put out some vile sound bytes. You know how wounded animals strike out?  That.

I am glad I went. It was important to do. Finally - someone is thinking about the children.  And it is the children.

bryn mawr - not too far from my location. a nice town, loaded with old main line money.

our philly turnout was great also. FUCK THE NRA!

We marched in Columbia with thousands of others, adults and young people, which was great to see. Even greater were the register to vote stations with long lines of people registering.

Hope. Those kids are our hope. I support them.

That is fabulous. I didn't realize the number was so high; wish I had gone.