Whenever I Call You 'Friend' 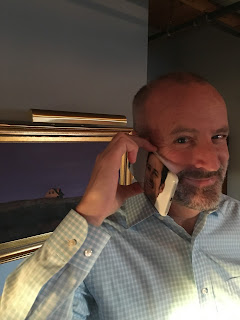 Listen, I lost the 7th Annual Academy Award Guessing Game®.   But I had to take it like a man and pay up.

In our bi or thrice annual contests, we've expanded from bragging rights and / or cookies and moved to cupcakes.

When I lost the Golden Globes contest  - I could have done cookies, but Mike's endocrinologist would have scolded him on his HgbA1C.

I could have had liquor delivered, but his sponsor probably would have scolded me.

Ok, the reality was, I didn't want to stand in line at the post office to mail sweets to my sweet sour.  Just figuring out the Overnight v Express Mail slips requires a doctorate, and who has time for that?

So for the GG, I just went on-line and bought movie tickets for Mike and his husband. They used them and the loved it, as I also got to pick out their reserved seats.  I'm a good friend. A great one, in fact.  ....if I say so myself......and trust me, it's only me saying it should Mike ever be asked.

For this loss - and there have been many - I needed to think a little differently when it came time for his 'prize'.  Ruckiry (not Jon's boss), every now and then I come up with what I think is a good gift idea.

Knowing Mike is on the top 10 Armie Hammer stalker list (he'll say top 3, but nu-uh), I had determined it had to be Armie related.

The full-sized cardboard Armie would have been fun, but you know - how long are you really going to keep that around (though 30 years later, I still have my full-sized Pee Wee Herman, so what do I know?). 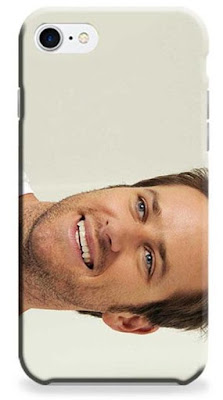 
I tracked the package.....ever so slowly. I kept Mike updated on delivery of his unknown gift - well, unknown to him.

Two days ago I got a nice message and the title photo of him "using" his new gift. I assumed - wrongly - that Mike's husband would have rolled his eyes at the gesture, but apparently he laughed and laughed.

Mike says he'll use it when he's in Provincetown - where they summer.....or Hollywood (insert eye roll}.

What I heard: "I'm not using it in public or at work, lest people think I'm gay."   Ohhhhh, honey!

I'm glad he got a kick out of it - though I can guarantee you for the price I paid, it is not protecting his phone one little bit.  But it does pay off my betting debt.

Song by: Kenny Loggins & Stevie Nicks
Posted by Blobby at 12:08 AM

YOU have a pee wee herman cardboard? FAR OUT!

mike is a cutie!

That smile is ever so smug (M's not Armie's!). A victor's? It's rather unnerving, I must say.