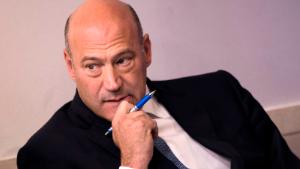 I wish I could muster up an ounce of energy over Gary Cohn leaving the White House. I wish I had an ounce of respect for him, but I don't.

A. He took a job at the White House, so already he lost points.
B. He's from Goldman, where BLOTUS said Hillary was too closely tied, so that was a big fart that just landed.
C. He stuck around after Charlottesville.

Still, he claims he waffled on whether to leave after BLOTUS didn't and wouldn't denounce white supremacists. He ended up staying which, to me, so sent the wrong message - to the administration and I'd like to say to the country...............except, right now it's BLOTUS country and none of his supporters if some heeb quit his job. They'd have applauded it.

So, he left over tariffs.  Whatever makes you sleep better at night, Gar.

Still, it's nice to see yet another staffer depart. McMasters isn't far behind. Maybe Kelly - the chief of staff........not the crypt keeper.


And don't start me on KelleyAnne's Hatch Act violation. While she probably crossed the line, she's done it before with Ethics.  Last time they said it would be the last time:

"Upon completion of our inquiry, we concluded that Ms. Conway acted inadvertently and is highly unlikely to do so again."

....and then she did it again. It was very likely. Since with this administration, Ethics is 100% toothless, no one is going to touch KelleyAnne.  Just the way they didn't touch whathisname Cotton when he violated it months before that.

Song by: the Cardigans
Posted by Blobby at 12:10 AM

in this dictatorship, there are no morals, logic, leadership, compassion, brains, facts. just lie upon lie upon lie. and flaunting the law. sad.

Racist anti-Semite, you'll work for?
But a tariff gives you tsouris?
M'kay.