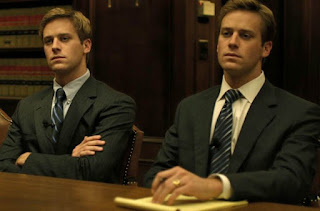 Years ago - like 30 - my friend Jon and I were sitting at the bar of a hip little place called K2U. Sitting near the corner, we had our back to the front door, but had a great view of all else.

Near us, sits a man and his friend. The man talks to me, very nice, but mentions he's seen me out at the Garage - which was, and now is again - a gay bar. This is while we lived in Columbus.

While he was being nice, I wasn't. I was, but I wasn't. I decided to play a game and knew Jon would automatically back me up.

I told this guy I had never been to the Garage. He insisted he has seen me there often {ouch}.  I cop to the fact that my identical twin is gay, so it might be him he has been seeing. This bit of fake news, intrigues the guy. One straight twin, one gay.

While I don't remember it now, I am certain I provided many details about "my brother" and how he goes out a lot with his friends. And while I support him, it's not to the level that I've ever joined him out at a gay bar, nor would he go to a bar like K2U with me.

Jon chimed in at the appropriate points in the conversation, helping me keep my tall tale all the taller.

Suffice to say two to three hours later it all fell apart, while making the rounds at the Garage, with Jon and in the same outfit I was wearing at K2U, we came upon our new 'friend' from K2U.

I only tell you all of this because of an interaction I had last night. As I was not home all day, I went out to pick up dinner for 710 and myself. Upon obtaining said food, I walked to the door and passed by a man I somewhat know from work.

Ryan is, by some accounts, a devastatingly handsome man. He does posses model-like characteristics. My best description is he's "shiny".

So, he pretty much walks right past me and I said, "Hey Ryan, how are you tonight?".  He turns around and just looks at me. Now, he knows me but doesn't KNOW me, so I can see the wheels turning.

"I'm Rob.  Ryan's my brother".   (and clearly an identical twin brother at that.)

I counter with, "really?  Really?  This isn't a joke? Because I've played this joke before" - to which I got a really befuddled look.

He goes on to say he gets called "Ryan" all the time and so he just answers to both. I clear up for him that I work with Ryan - so he tells me, "Ryan just moved back here....", which I knew because, well, I work with him.

Me and my fictitious twin were not has handsome at Rob and Ryan (assuming they are two different people!).  I can only imagine what fantasies people conjure up about those two...separate and together.  Not me, of course.  I'm speaking of others.

Email ThisBlogThis!Share to TwitterShare to FacebookShare to Pinterest
Labels: Funny

ROR...I have no memory of this but it does sound like something you/we would do.