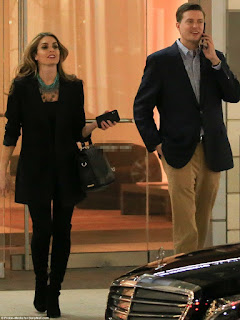 I made a Facebook joke about Hope Hicks stepping down to spend more time getting slapped around at home.

Not that I really want anyone to be abused, but let's face it - she's had (or now has) the facts.  If you want to resurrect the #whyistayed thread from a few years ago - look no further than Hope.

Trust me, there is zero way we'll ever find out if she gets a black eye. She wouldn't want to tarnish her time at the White House.....or her, what has to be, soon to be had book deal.

Local news was oddly discussing if yet another departure from the BLOTUS administration was such a big deal. "People come and go all the time" says they.

That they do, but there is about to be a third National Security Advisor, have already had two chiefs of staff and countless "aides" leaving and now the third communications director.....and all in a year's time, well, there is a common denominator.

You see, Hope kind of / sort of gave a glowing recommendation of wife-beater Rob Porter without kind of / sort of telling folks she was playing Hide the Salami with him.  ....or that he'd then take that hard, cured meat and pummel her face with it.

I'm speculating, of course. On the beating. The rest is pretty much open record.

But the #metoo movement, which BLOTUS is so not winning, Porter got his walking papers and let's face it - Hicks was collateral damage - and rightfully so. I mean, who gives their resignation and right then and there it is their last day?


So yes, WKYC - it does matter who leaves the White House and how often and why.  There is a direct correlation to leadership, or lack thereof.

Song by: Rosanne Cash
Posted by Blobby at 12:01 AM

mueller probably has something on her ass...let's see if she pleads guilty and sings like a canary!

Even those who didn't know it before must now agree that the current administration is literally 'Hopeless'. (And how many more are going to use that line? - or already have?)

ugh! i cannot believe i didn't use that line. good one.

I see that 'Young Turks' got to 'Hopeless' before I did - and I bet they were by no means the first.

And I believe that she had a fling with Lewandowski before Porter. Considering their track records and BLOTUS' inclination for emotional abuse, I think that its fair to say that Hope has some work to do. Once is incidence, twice is coincidence, and three times is a pattern.