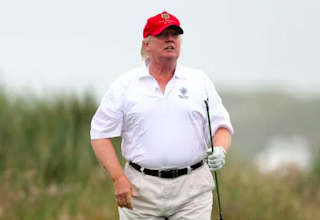 Mucho coverage of BLOTUS stating another pack of lies.

'There' being a Florida school with an active shooter with a semi-automatic weapon.

Much fun has been made at BLOTUS' expense...and for good reason.  Many of them flawed.

Yeah we get it.

How about the overlooked one, and the one I have yet to hear any one say - and look at the pic before I say it:

Perhaps he would have waddled walked into Parkland. But 'run'?  You may as well get a mic, a brick wall and a two drink minimum for these jokes.

...and BLOTUS, for the record, we don't have to 'test it' to know. And I DO really believe that.

Action-man hero, Superman and James Bond all rolled into one - 'rolled' being the operative word.

if the orange fat ass can't even walk a golf course, then how's he gonna waddle into a school? assclown!

Maybe someone can knock him down and roll him into, say, a burning building type situation. That should block the smoke enough for folks to leave the building. Of course, if he catches fire, it would take forever to put out!