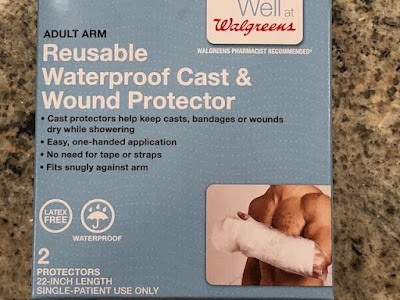 Listen. You cannot say you weren't forewarned about how my shower might go. This is it, people!

Walgreens - and probably other establishments where I don't hold stock - sell cast condoms protectors. They might not keep you safe, but they are supposed to keep you dry.

I was counting on it.

I was hoping the product would also give me a body like the one on the package, but  - spoiler alert - alas, it did not. 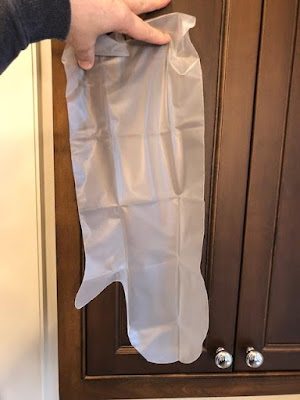 Sure, it's seems about the right size for my peen, but will it fit my entire arm?
Only time will tell. 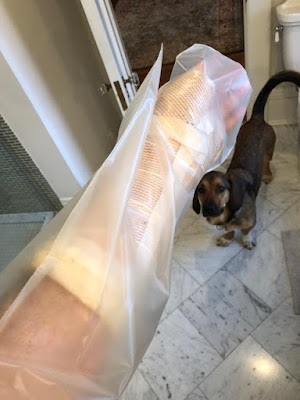 It fits - and it's Shep approved. I don't know why the box doesn't say that. They'd make a killing.

There actually is a space for the thumb, while nice, seems impractical, unless you're Andre the Giant.

Part was the protector, part was my mobility, but showering was difficult, though not impossible. It seems I am more left handed when it comes to soaping up. And while the plastic was seemingly secure, I still too every precaution to keep it out of the spray.  ....and let me tell you, shaving the head with the wrong hand........tricky! But not cuts.

Overall, it seemed to go well and I only dropped the soap once. The shower took a little longer than normal. 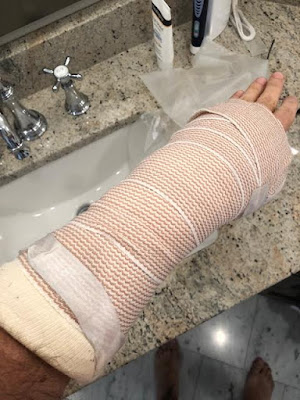 Everything is dry. It did its job.

There were two to a pack, and they're reusable. I suppose the elastic in the band might wear out, but we will see. I might end up going through both of them.

This isn't a product folks are going to need often - if at all - but at least it works.
Posted by Blobby at 12:03 AM

Good to see you are keeping it clean. Be careful, you don't want your screw to come lose. When I had my spine done, one of the docs told me about a guy who started moving to much to soon, and the end of one of the screws was snagging his shirt when he arrived back at the hospital.

this post made me spit cawfee at the screen, esp. pix #2; are you bragging?

at least it's "shep approved".

See, I went in the opposite direction to Anne Marie. To me, dropped soap and took a little longer meant you had company showering!
.