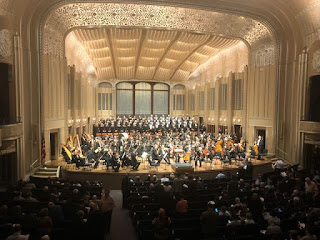 That was the billing on the Cleveland Orchestra concert that 710 wanted to see. I was game. While I like 'Bolero' enough, I was happy it was a selection they were not playing.

He splurged and got box seats.  (this is where you oooh and ahhhh.)

I'm finding the only way to see classical music is if you have your own box seats. Who wants to sit with the riff-raff?

710 was a fan of the Mother Goose Suite since he was a child. I am 99% sure I had never heard it.  I enjoyed the first movement of the piece. I thought the violins were extraordinary. Then it just kind of fell apart. I'm sure the playing was fine, but the piece itself was not for me.

The second act was just mocking me:  Piano Concerto for the Left Hand.

The super dedicated bachelor / pianist, Jean Yves Thibaudet, played the piece as required - only with his left hand. I can't say I enjoyed the piece itself, but it was extremely interesting to watch. Actually, I will clarify: I liked the piano part - most or the orchestra park didn't thrill me in the slightest.

The last piece.....ugh. Daphnis and Chloé .  As we were walking out someone behind us said something about it sounding like something Spielberg would use. Oddly, I thought about Spielberg when it was being played too...........but only because it's like some of his movies when you thought it was going to end - and happy it was going to happen - and then it just kept going.

Before the piece started, 710 says to me, "Little known fact: this was the soundtrack to Centurions of Rome.

I should back up.

Anyway, I found Daphnis and Chloé to be a mess. A 50 minute piece I just couldn't get behind.  Oh oh oh......and one lady in the chorale (100 folks there), and she was so distracting with her movements - when there were supposed to be none.

I know I'm glad I went. I need more exposure to this stuff, and I've liked other Ravel works....just not these three.

Next week, we might go back, but for Beethoven.   .....but I want box seats. I can't go back to the general population.

I think (though admit I may be wrong) that many, if not even most, of Ravel aficianados, among whom I number, would rate his 'Daphnis and Chloe' ballet music, and the Left-Hand Concerto as being among his very greatest works. I would concur with them - adding the A minor Piano Trio to the shortlist. 'Mother Goose' is also right up there with the best of them. But as with all such things it's a matter of opinion and always highly subjective - there is no 'right' and no 'wrong'. It's what one responds to on the 'inside' that is the ultimate measure. (I don't mind owning up that Bruckner, for instance, leaves me largely unmoved, even disturbingly naive - and, in the opera field, much of Verdi leaves me cold.)
If you don't already know it and you're interested in pursuing the music of Ravel, have you tried his G major Piano Concerto i.e. for TWO hands? It's more popular than the Left Hand (only) concerto - the first movement being an absolute dazzler, a 'firework' piece if you will, while the slow movement is no less remarkable for its beautiful, long, bravura-sustained melody-line. The only pity is that the final movement lacks, in my opinion (and that of many others), the sheer gifted genius of the first two. For that reason I think the single-movement Left Hand Concerto wins on points for consistency and imaginative strength.

I've never seen the 'Centurions' film though it sounds intriguing, at least visually. However, with that soundtrack I think I'd have to watch it in soundless mode.

Now don't even get me started on Beethoven - either heard from box seats OR with the hoi-polloi! ;-)

blobby is a culture vulture.
box seats - ooooh.
I like "bolero".
I like "moonlight sonata" and beethoven's 5th & 6th symphonies also. enjoy!

Box seats-ahhh. I don't care for classical music as a whole. I do like Bolero probably because of Torvill and Dean's ice dance routine. My fifth grade teacher tried to get us interested by playing a recording of Peter and the Wolf. It creeped me out and then put me to sleep. He then put on a Broadway recording of some musical, (I forget which, probably the Sound of Music) and I perked right up.
Music is funny in that different kinds appeal to so many different people. That's the way it should be.