Ad of the Month

So on a late January weekend afternoon, when it is cold, snowy out and you're just aimlessly flipping up and down the boob tube channels...........and you come across this.

Ok, not this exactly. But yes, this. The one on tv was an informercial that took up either 30 or 60 minutes. You can get the same idea in the 39 second version.

Naturally, I couldn't stop laughing, because well, women siting and sinking on to poles. Usually one must rent movies from behind a curtain to get this kind of entertainment (I mean, I've heard!).

Of course, you must know I didn't watch more than 2-3 minutes of the infomercial, but I did grab my laptop immediately.

I went to YouTube, did a quick search, copied the link and sent it to two of my cousins. The guy ones. I was not 100% sure where the female ones would come down on this in terms of humour. I think some would have roared.........but you know......#metoo and all.  I didn't need the hassle.

This is what I got back: 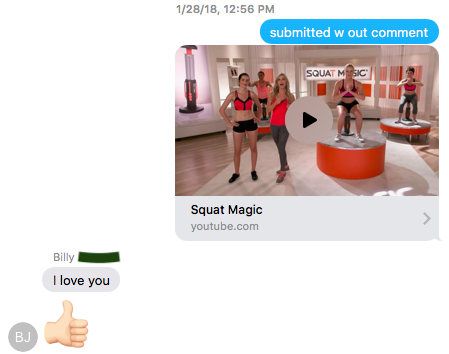 It took 32 minutes for the response, but it's Billy, he doesn't always grasp the I in Instant Messaging.

It was readily agreed on that Billy would be in divorce court should he buy his wife one, and no court in the land would take his side. It was also agreed that she would get everything.

I'm not proud of this, but I *might* have chimed in that they're missing a marketing opportunity, and lost marketshare, by not focusing on "outside the female community"  (I did not say "gay").  Billy says I didn't watch long enough.

I suppose that's why it took more than half an hour for his reply. He claims there was one guy and he had a BIG smile on his face. Maybe that was #fakenews.........maybe not.

I'm not sure this product works. I'm not really sure this simulates an actual squat.

David did chime in asking how much Fitbit activity one might get using this device.

Email ThisBlogThis!Share to TwitterShare to FacebookShare to Pinterest
Labels: Ad of the Month

I had the same thought whilst watching your clip; this could be a guy OR girl product; and with "special attachments", everybody could get a good workout! external AND internal!

I’d be worried it malfunctioned and went too far up. If you catch my drift.
JP