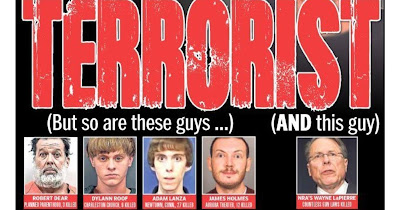 BLOTUS believes that Wayne Lapierre and his cronies are - and I quote - 'great American patriots'.


I call them: accomplices.

As you saw in yesterday's post - they are terrorists. Well, I think they are.

I suppose the big news yesterday could have been the new charges brought up against Manafort and Gates.  ....and it is big news, but laundering $30,000,000?  Big whoop.

The NRA moves that kind of money around every election - we are worried about Russian infiltration when we already have someone manipulating the outcomes of our elections.

But can we go back to the 'accomplice' part??

You know, Charles Manson never stabbed or shot one person in the Tate-LaBianca crimes. Yet those were the crimes that put him away for life........until death.

Sure, Charlie provided the means, and maybe even the idea, to use those means to kill others. And still, he rotted away in prison  - oh and convicted - for seven counts of first degree murder.

Hell, he wasn't even seen as an accomplice, but as a murderer.

In theory, we have a mass murder, walking around free, conspiring with and funding the biggest politicians in the country.

His name is Wayne Lepierre.


I have way more respect for Manson.

RAMEN! LOCK HIM UP!