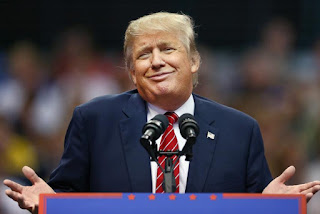 "They were like death and un-American. Un-American. Somebody said, 'treasonous.' I mean, Yeah, I guess why not? Can we call that treason? Why not? I mean they certainly didn't seem to love our country that much."

There are three sides to this BLOTUS quote.

1. He's an asshole who actually think that because some Democrats didn't stand and cheer for him, that they are committing treason.

But please note:  he did it in his dicky passive-aggressive nature, forming it under the question that 'other people' said it - not him. Be a man, who is this 'somebody'?

2. He's an asshole who wants, and is actively attempting, to deflect his own treasonous activities / behaviours by calling others the same.  Unfortunately, this works on too much of the U.S. population and far too easily.

3. He's an asshole who wants people to start thinking that anyone who doesn't fawn over "him" is actually dissing the country itself, as if to love / hate him, is to love / hate 'Murica, which then in itself should be treason.

All scenarios have BLOTUS as an asshole, so this point isn't up for debate.


#1 and #3 kind of seem similar, but there is a big enough difference, and the latter is far more dangerous.

I'm guessing, 7 times out of 10, any reasonable person who heard this rolled their eyes and muttered, "what an asshole" (you know, because he is), and went about their day.

2 in 10 took the statement to heart, while they loaded their semi-automatics looking for make america great.......again.

1 in 10 will realize this is a real chipping away at democracy, spirt and will and those 2 of 10 are taking their direction from BLOTUS to homogenize the way of thinking in this country until it's 'my way or the gas chamber highway'.

Shrug if you just. He's already discrediting media, so the most plausible stories are no longer even considered relevant. He's in the midst of discrediting the department of justice, so no laws or their enforcement hold any authority. He has defied a House (419-3) and Senate (98-2) vote on sanctions to Russia  - 100% veto proof - and Trump refuses to sign or to sanction.

THINK ABOUT THAT:  the Executive branch tested the Legislative and Judicial sides on what it can get away with.................and won!

No checks. No balances. No Founding Fathers shit. For all those in Congress who think they had a say in anything, I hope they are taking a long hard look in the mirror. They were puppets before.......now they're nothing.

srsly - do you know how many articles I had to peruse to find that vote numbers? Even the media isn't freely publishing the severity of this let alone the disparity of said vote. So yes, the media is a big part of the problem. It's not the 'fake news' it's the no news.

We are now only waiting on BLOTUS' own army to overthrow any opposing factions - to make sure no one can stop him.

And he's doing it with ease and no one truly stopping him. Hell, even the Dems in charge shrug and basically throw up their hands in a 'well, whatta gonna do?' kind of thing.

The truly truly amazing thing going on?  All of this bullshit, and the Dems might - might! -  retake the House in 2018, but not strong enough to take 3-4 fucking seats to take back the Senate.  Not that it would matter.  Heir BLOTUS is on his way to being Supreme Ruler.

Song by: Jane's Addiction
Posted by Blobby at 12:01 AM

Am I wrong, or do I remember the GOP members sitting and not applauding during Obama's speeches (remember "you lie!")? Can we call that, like, I dunno, like treason? I mean, they certainly didn't seem to lover their country that much.

no, WCS, you ain't dreaming. there are pix with the GOPricks sitting and glowering at a REAL PRESIDENT.

this orange idiot thinks he's a king/dictator, just like his BFF putrid putin.

and yes, the dems and the media are shrugging it off. doesn't ANYONE have a spine?

His delusion knows no boundaries. It just keeps on and on expanding!

If it's treason not to stand and cheer for a lying hypocritical sexual predator adulterer racist pussy grabbing moron, put me down in the treason category.

At least assholes serve a useful purpose. This turd, not so much.