Caint Use My Phone 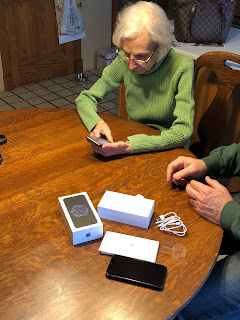 My 89 year old mother is now officially part of the 21st century. Yesterday, we got her an iPhone.

It's not quite as extravagant as it might sound. First off, we got her the 6 - and we got it at {gulp} Walmart.

I know....I know.  It wasn't my first choice, but what a crock that Verizon or Apple does. The latter was selling that phone for about $550. Verizon claims they don't sell them at all due to a lawsuit against Apple regarding slowing down of phones on purpose.

Here is where I should have called bullshit on that. A. The Verizon website says they sell them.  B. IF they are suing Apple, why are they selling either the 8 or X?

Walmart had the phone for $199 - and a monthly cell rate of $35. Verizon said going from a flip phone to smart phone package would start at $100 per month.

Used car salesmen have much much much more integrity than cell phone shysters.

The bigger reason to get this for her is as she ages, her voice is.....challenged. She's finally going to a doctor about it, but at this point, I'm assuming it will be to keep it where it is, as opposed to improving it. Losing it anymore would be close to the point of mute.

So, she needs a device to keep her communicating. Her flip phone didn't even have texting capabilities, and even if it did - do you remember how texting worked on those?  She could never do it. I couldn't.

And she can use apps to order Uber, etc, where she won't have to talk to anyone to arrange such things. She has an iPad, so she has some of the functionality down. but we were over there doing a tutorial for her.....or with her.

I got her to get Siri to set a daily reminder to take medications at a certain time. She thought that was great.

So we got it, got it all set up for her, including importing 2-3 dozen contacts so she'd be ready to go. We can return this in the first 15 days, so if she's really not feeling it, we can take it back.

This is really for convenience. Honestly, sometimes it's just easier to understand her in text / email then sitting across from her at the table. But we have to be practical - at some point, this might be the only way she can communicate.

I will say, Siri picked up on everything she said, no matter how hard it was for me to understand (though truth be told, yesterday was a pretty good vocal day). I showed her she doesn't even have to go to 'favourites' or 'contacts' and just tell Siri to call me.  That made her face light up.

So, she'll give it a try and write down any questions she may have regarding the device.

YAYZ for your mom! but I still won't buy a crapple product.

Technology enhances our ability to remain independent (I am doing a piece on that in NC next Thursday.)

Your mother is more advanced that I am ....sigh.

I got me mom an iPhone 5 about 3 years ago. She’s 86 now and loves it. Best part for me is the emergency contact list. If she falls she can say “Hey SIRI, Call 911” and it will then after the 911 call is co pledge the iPhone will automatically text my brother, me and a couple of her friends, all of us who are all added to her emergency contact list, to tell us she has called 911. It’s all part of the iPhone SOS and not part of any specific plan. Check it out.