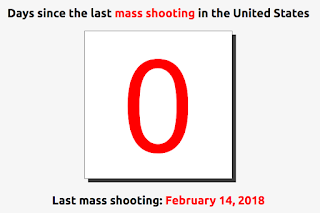 Thoughts and prayers have been distributed per protocol. Nothing done in regards to either gun control (not elimination) or mental health services....per protocol.

Spare me the 'had the teachers been armed...' bullshit. You have a 19 year old terrorist with an AR-15 that can unload 600-700 rounds per minute. But he's part of a well regulated militia, so we're all good.  I mean, except for those 17.

Personally, I wish these fucking politicians just came out and were honest about their feelings for their lobby-group: "A few dozen dead bodies per month is the price we pay for 'freedom'".  Clearly, they're saying it anyways........just not out loud. I might respect their honesty, but not their thoughts. Or their beings. Right now, they get zero respect.

And yes, if there must be a few dozen deaths per month due to 'senseless shootings', I fully advocate those deaths be family members (especially their children and grandchildren) of the senators and representatives who so strongly and steadfastly defend guns without, or with few(er), restrictions. The ones who take NRA money.

Make no mistake. I want the senators and representatives to be spared. I want them to have to live with that every single fucking day of their lives.

But their actions (or lack of) affect thousands of families per year. Let it truly touch those who influence laws and have let it happen to others.

Until then? Well.......I'll see you back here in a week or two when the counter goes back to 0 days.

I gave up when nothing changed after Sandy Hook