If I had a Hammer 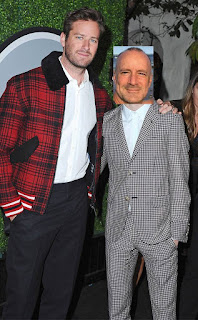 Let's start with Bad News. I did not win the 7th Annual Academy Award Guessing Game®.

I repeat. I did not.  But on the Good News side - I wasn't robbed. I actually feel ok about my loss.

Mike and I had great selections, for the most part - save five - mirrored each other's choice.  Five is not a huge margin. Very little wiggle room.

I correctly selected 19 of the 24 categories. Two we both missed (same ones). I took one. He took three. But that said, it came down to the last three before I was out of it mathematically. Well....had I taken one more, we would have tied.

Documentary Feature was the turning point. When he won that, he was ahead 2-0. It would be a tough comeback and as it would turn out, from one I couldn't recover.

As is usually the case, we IM'd during the entire thing - totally ignoring, and being ignored by, our respective husbands.

The show itself? Meh.

They handled the #metoo moments fairly well.  Well.........until Ashely Judd, Annabella Sciorra (sp) and Selma Hayek came out. Their resumes say they're actresses, but I just kept waiting for one of them to yell, "line!".  Maybe no one isn't hiring them because they wouldn't put out - maybe it's because they can't act natural in front of a camera.

The In Memorium section wasn't complete. Jennifer Garner intro'd it, but the segment didn't show that her career had died.

While Mike did not like Nicole Kidman's big blue bow'd dress. I did. Not the bow, but the colour. And the slit. He might not have appreciated it much when I said it had to be the best dress in which to go take a dump. I honestly don't know how those women pee or defecate on Oscar night. It's physically impossible.  ....except for Nicole.

Emily Blunt proved why having a stylist - a good one - is important. f'ugly.

We both agreed, that Jennifer Lawrence is the new Anne Hathaway.  ....and no, that is not a compliment.

And it is possible that no one other than Armie Hammer can pull off a burgundy crushed velvet tux.  He rocked it.

Speaking of Mr. Hammer, should he go missing, or should any harm come his way, please reach out to me. I might have some 4-1-1 about a certain someone who is obsessed with the former Lone Ranger and is looking to become his future ex-husband.

Just for the official record: here is the breakdown

Mike claims liquor stores only deliver cases of booze. Who would know more than he? It's probably not true and he's just seeing if I will send him a case of gin. Blobby didn't just fall off the liquor delivery truck yesterday, you know!

I'll figure it out. I suppose I can go back to baking him cookies, but swimsuit season is right around the corner.


Oh - and I stayed up for the entire show. I actually had to - and just because he shamed me (and he did!). I am the first to bag it and say I'll catch up in the a.m., because usually I've lost by the last quarter.  This time, it literally came down to the last movie to see if we'd tie.

Spoiler Alert:  we didn't.  But honest to g-d, the second they announced Best Picture, I wished Mike the best and closed my laptop and headed upstairs to floss, brush and hit the hay.

I'm sure Mike stayed up to revel in his well-deserved win and scour the internet for pictures of Armie.  I'm just guessing.

I'm sure your score would be higher than I'd have got, B. If I do see a few more films than you manage to, it makes your own accurate guesses even more impressive. Your finger's clearly more on the pulse of what's in, what's hot and what's not than a lot of people's,

all the ladies (and the menz) were drooling over armie!
as for me, didn't watch don't care.

I’d like an Oscar for my mantle. He could sit there with Armie.
JP