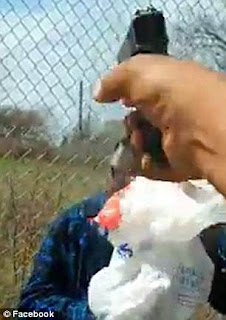 Oh how I love it when Cleveburgh makes the news.

I debated on whether to title this "Fame" or "Sacrifice' but ended up with "Stream".

...as in streaming video.

....as in, streaming video while I shoot an innocent man on the street.

Perhaps you've seen it. It made national news. Hell, on Sunday night it led the national evening news.  That's a pretty hefty thing to do when you've got the bullshit of North Korea and SCROTUS matching "wits".

So yes, a man got out of his car while being 'live' on Facebook....went up to a man walking down the street and shot him dead......all while filming.

The victim was an elderly man - a retiree - who was walking home from his Easter dinner. His last supper.....if you will.

Now, on social media, the killer (though why the media is calling him an "alleged murder", when it's right there on video is a little beyond me) is / was telling his followers that he had 'snapped'.

Also not buying his claim that he killed 14 others either. I would think 14 dead bodies would be harder to ignore, should they exist at all.  That said, my work went on lock-down as allegedly the killing was close by.  It wasn't.

Still, the reason for my almost 'Fame" title is:  is this what social media has become. The need to be noticed so badly that it goes to extremes?  And you thought the Selfie Stick was narcissistic.

Boy were you wrong.

As disturbing as it all was - and yes, they showed the entire thing here in the CLE - I am not horribly surprised. That might be the saddest part of this story................well that the dead man.

Song by: Forest for the Trees
Posted by Blobby at 12:04 AM

the murderer is one sick bastard that should be executed upon capture.

One does not "snap" and then kill someone while filming it and then post it to social media and then escape.

I heard on the noon news that PA state cops caught the bastard in erie county; as they moved in he shot himself. GOOD! no loss.