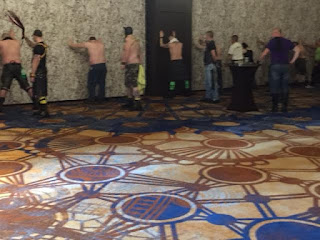 Let it be known - I'm not into flogging, publicly or privately.

But for those who are, isn't it nice to know that there are educational sessions on the proper ways to flog someone?

This weekend I participated in what is probably my last CLAW......or Cleveland Leather Awareness Weekend.

Two things I've said the last two years:  that that would be my last one and that leather isn't necessarily my thing.

CLAW does a great job with fundraising and awareness of any number of issues. But locally, they support the the Cleveland GLBT Center and does a lot of work (and financially supports) HIV awareness programs.  There were no less than four separate local hospitals and research areas in attendance to educate and spread the word.

A few months ago the powers that be came a-calling and asking for my assistance. As it turns out, I'm one of the more reliable folks who have provided support over the years. They needed someone to coordinate the Skills and Education sessions.  Not a small job and one of the things I've never ever ever done.............or even attended.

My past experiences there have been paperwork, tax forms and managing a consignment area.

As it turns out there would be 103 (!!) sessions over two days. Ruckiry (not Jon's boss), I had people working for me that would do some things I at which I would fail:  mainly AV and rounding up volunteers.

It was weeks of work  Rooms. Sessions. Who needed AV and what kind - and then how many projectors, etc were available and how to get them from one room to another and then how to mix it up so proximity was kept.  THEN you add in physical bodies.

Mind you, most of it was just spreadsheet work. And I have a new found respect for Google Documents, which can be shared by other managers within the organization.

In my CLAW past, I had never attended an education session. It was all work. The "joke" is, coordinating these, I still didn't quite attend.  Quite.

With a few no-show volunteers, Blobby had to go check on a few sessions to make sure they started ok.  All the gents (presenters) were great. Prepared and ready to go. Participants were seemingly never on time. But I stuck my head in a few sessions.

I stayed away from anything 'pup' related.  I just do NOT get it. Nor do I actually want to. Ditto with mummification.  No judgment.

Honest to g-d, there was some guy into crucifixion. Allegedly did nails and all.

Even the guys I worked with who had seen it all squirmed a bit when talking about that one. Not that any of them attended a session. That's the joke......the leadership just doesn't participate. There's zero time. Someone's gotta do the work.

I will say this about the attendees, there is far far far fewer judgments within the confines of the host hotel than by the general public when just one of those guys walks down the street in a kilt.

Actually, there are almost no judgments from the participants.

I encountered a few really really nice guys.....and a few cute ones too. And I don't think I realized how international this thing was:  sure you got the Mexico and Canada faction. But Germany, the UK, Australia were represented too...........and I had a great convo with a guy from Jordan!

That all said - why won't I do this again? I think it's the amount of work. I am happy to help the beforehand stuff - and I have some takeaways where I could easily improve on what they'd done in the past - but the on-site work is non-stop.  In eight hours, we're talking 18,000 steps (thanks FitBit!).

Mind you, with those changes I will suggest to the next go-round, it should make it much easier on the days of the event. It will truly eliminate so much hassle. But this is how change is made......have someone who is in operations be a change agent.

CLAW wanted me to do some time today, but no.  Four or five weeks of work after my full time job and a cold, rainy day being stuck in a small command center, I was happy to decide to be home with my husband, dog and cat.

The organization does great work, regardless of what one might think of men in leather and all that might go with it. I think the ability to let go of judgment is no small feat......even if it's for a weekend.

Email ThisBlogThis!Share to TwitterShare to FacebookShare to Pinterest
Labels: CLAW

Planning conferences is a ton of work, I do one with 40 sessions, that is crazy enough, 103 is nuts. You don't get to hear any of the sessions, even the one's that make you shudder at the thought.

OK, then we'll put you in charge of the next FYRE event.

Given your SCROTUS commentary, I suspect you might be into public flogging, just a little bit.