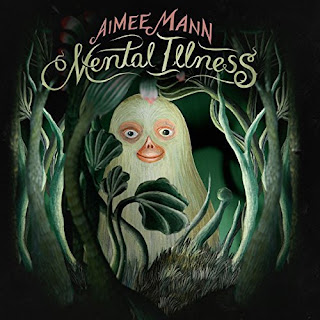 Aimee Mann released her new solo disk at the end of March, Mental Illness.  Critics and the artist call it her "sad" or "down" disk. Or "stripped down" one. Or "acoustic".  I can go with either of those, but as you compare her work, can you call this any more (or less) down than say Lost in Space, Bachelor No. 2 or even the Forgotten Arm?

Mental Illness is certainly better than @#%&*! Smilers or Whatever. Not that either of those disks didn't have their moments, just overall they didn't rank as my favourites. And Mental Illness has its moments too, but I'd put it in same league of Lost in Space, Bachelor No. 2 or even the Forgotten Arm.

I am glad I waited a few weeks to review. The first listen was ok, but it took a while for some of the songs to gel for me.

To hear the press on this, Mann was listening to a lot of Bread and Dan Fogelberg when deciding on the sound of the disk. Honestly, I don't hear much of either of those in this collection (maybe the former with "Knock it Off"  and perhaps some elements of "Philly Sinks" and the latter with "Poor Judge".

Still many of these songs wouldn't be out of place on Bachelor No. 2.  That's not an iffy compliment at all, it's just that some of it seems done before......but I can live with that. "Good For Me", "Lies of Summer"    "Simple Fix" and "Stuck in the Past" could be lifted from Lost in Space (another compliment).

There are other stellar songs:  "Poor Judge", "Goose Snow Cone" and the possibly best song, "Patient Zero".  For me, the songs that took longer, were "You Never Loved Me", which actually might be better, if she left out the repeating title chorus. Just the opening of that song is great....it drags a little as it goes on.

While "Rollercoaster" is an ok song, in the big picture it doesn't cut it for me. I won't hit 'skip', but I don't truly enjoy the song.

I like when an artist sticks with something they know. I would say Mann branched out more with the Both and with Smilers and Charmer more than she does with Mental Illness, but those disks had very mixed results. With this one, she seems more comfortable and it shows in the music.
Posted by Blobby at 12:02 AM