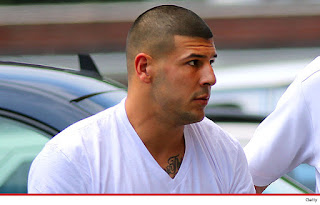 Awwwww.......of all the felonious NFL players, why'd it have to be the only hot one of the bunch to up and kill hisself???

I don't even think it's arguable that of  all those crime-committing players that Aaron Hernandez was the hottest.

To be fair to the late Mr. Hernandez (well......not so much late, as he's never coming), sure, he may have shot and killed one guy, but he did not get convicted of the two drive-by killings of two others. I mean, really, he was only 1 for 3.  So he wasn't all bad, was he?

To Hernandez, I can only imagine that his prison sentence seemed oddly unfair - considering those other NFeLons (see what I did there???)  who got little or no jail time at all. I'm not sure his ending brought any kind of relief to the family of his victim. Honestly, he was sentenced to life with no chance of parole. I'm not sure I wouldn't consider ending it too.

I can't rule out the possibility of being that hot in prison was too much pressure. While technically the man was a tight end, you know he was top bunk all the way.