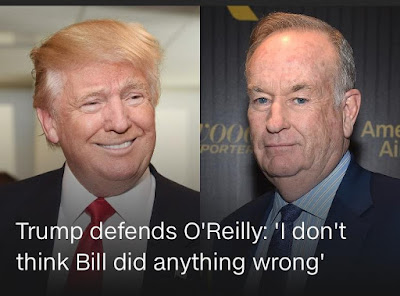 This is brilliant. Pure comedy gold.

GOLD, I tellz ya.

....and I'd be laughing harder, if underneath the surface it wasn't all so fucking tragic.

Well....tragic for anyone who isn't a FOX or SCROTUS supporter.....who are just shrugging their shoulders and thinking 'what's the big deal?'.

I snickered, just six days ago, when without any sense of irony, Dump acknowledged National Sex Abuse Awareness Month.

"Grab her by the pussy", indeed.


I'm repeating it again: Dump had the balls to proclaim April to be National Sex Abuse Awareness Month!!!!!

I mean - who better than a predator himself?


And of course he is backing O'Reilly. While people might have thought before that FOX "News" was in bed with the GOP, well now, the White House and Murdoch & Co are just performing non-stop, around the clock (I said 'clock!)  annilingus on each other.

Let's assume that Dump doesn't know the facts of the story. I mean, he doesn't seem to know facts. Period. So why would he be so well informed this time?  But this is a man who is paying out $25M for Dump University fraud claims, without admitting guilt.   So $13M {known} payments from FOX don't imply guilt in SCROTUSville {population: 1}.  Still, should he be so cavalier to presume innocence on someone so quickly?  It's not like O'Reilly has the best fucking track record, he's got his own recorded exploits, like Dump. They both have patterns.

I'm surprised that Dump didn't nominate Bill Cosby to head the FDA with his vast knowledge of roofies. What a wasted opportunity.

So, GOP women - you twats who voted for this D-bag - I'm having less and less sympathy for you. I certainly not saying 'you deserved it' when you a bunch of guys in a bar surround you while you're on your back taking on a train, and hearing the chant "1-2-3-4 nail that pussy to the floor".

But you GOP women looked away with his Billy Bush pussy grabbing comments. You ignored the stories of him walking in on under aged girls changing their clothes. You laughed off the creepiness of saying he'd date his own daughter. You know for a fact that he fucked around on his wives (at least two of them). He's degraded women publicly on their looks......or because of their looks.

So, while you GOP women might not have deserved to be raped, or grabbed, abused (be it physically, emotionally or verbally) or demeaned and assaulted......you're as much a part of the problem as Dump is.  You pulled the lever for him. And that's not a euphemism.

If you think his words and actions do not matter, think again. Now men can, will and have emulate(d) this behaviour.

Yes, you might not deserve what you get, but you did kind of asked for it......last November 8th.

Song by: Nirvana  (yes, I've already used this before, but it works)
Posted by Blobby at 12:08 AM

I've seen the RWNJ say "what about clinton and monica"? uh, consensual sex and clinton was impeached.

WHEN is this fucking dump nightmare going to end?

He'd probably like to have Bill tag-team a Pussy Grabbing Team with him.

Look at that picture, Gropey and Smarmy! I think I just threw up a little in my mouth, ick! Dear, sweet (I'm assuming) Blobby, of course he didn't pick Cosby. Bill Cosby is old, but he's "a Black" and His Royal Douchebag already has one of those! GOP = Grabby Old Predators.

Where's Chris Hanswn when you need him? And I wonder if anyone is marketing "Grab a Republican's pussy" bumper stickers.. yet?