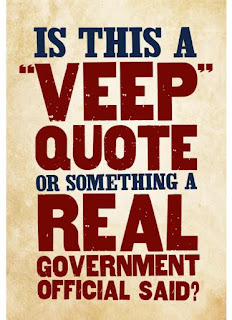 We've been DVR'ing Veep and it's new season. I have yet to watch one of the two new episodes.

The great and horrible thing about Veep is how real it probably is.

In the confines of television it is hilarious and painful at the same time. In the bigger picture, the show is probably scarily accurate, though I dare say that President Meyer's press secretary, Mike McLintock, is less of a bumbling oaf than Sean Spicer.

I think the difference between the HBO show and the circus in DC is the swearing. I have to believe the latter says "fuck" a lot more than the former.............and that's saying something.

So yes, I hit some click-bait on Facebook the other day for a Buzzfeed quiz on if it's a real DC quote or Veep quote. I'm a sucker they saw coming a mile away.

I know I need to get back into watching Veep, but I'm sooooo down on politics right now, I am not sure I can stomach how it will all play out or even if I can stomach a fictitious faux presidency.

At least one of the administrations will make me laugh.
Posted by Blobby at 12:07 AM

I can't remember a show that consistently makes me laugh out loud (or gasp) like this one does. And this season does not disappoint.

I heart me some veep but there is some weird disconnect right now - how are they going to maintain the satire??