You Win My Love 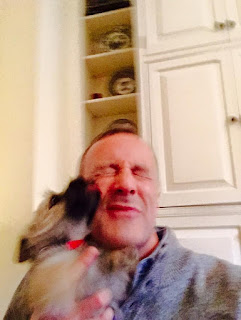 Canine Kisses.  It's the only love that Magic Mike XXS is feeling these days.

The self-professed king of Oscar Pool winning has fallen.

Sure, I love him, but he might be finding that hard to believe, even though I didn't even gloat.

A tie would not surprise me in the slightest. Not with Magic Mike. Not with how most of our match-ups have gone. And clearly not with the rest of you, since once again, no one else has actively participated in the 5th Annual Academy Award Guessing Game®.

Last year, Michael and I only differed on eight of the 24 categories. This year it is only six (yes Mike, your math was correct), so this left a teeny-tiny margin of error for either one of us. But as I' mentioned to him, 'all you need is one', which he stated should be the name of my autobiography.

And by the time I went to bed - with seven awards still to go, I was ahead.....by one. Mike accurately predicted that the best he could do was tie. Again, his math was correct. He faltered - as did most folks - on the Best Supporting Actor. I was wrong too, but why would anyone bet on Sly Stallone?

Mike commented that it was Stallone's last shot for an Oscar. But I reminded him that Sly could easily make a sequel to his truck driving / arm-wrestling mega-hit. That has "winner" written all over it.

The show was s-l-o-w as molasses....and not as sweet. Chris Rock killed the monologue (I loved loved loved his dig at Jada Pinkett Smith)....and little else. Kevin Hart did no better. And then there was Clueless' "Dionne" making such a bad "joke" that you could hear a pin drop in the auditorium. It was what I call 'Whitney Cummings stand-up awkward bad'.

Mike, "my friend", called me a "wuss" and "pussy" for not staying up until the end of the show.

He's a charmer, that Mike.

It's a wonder he's still married. And I didn't dare tell him I've been called a lot worse for a lot less. He'd take that 4-1-1 and run with it.

But honestly, it was 23:10 - and with seven awards and Mr. (yes, I still think "she" is a dude) Gaga still hadn't performed her rape song.  Maybe Mike didn't need his beauty sleep (because he's already so beautiful? or because no amount of sleep could help him?  discuss.), but I did.

The results are below, which shows I was the winner!

* If you heard Sam Smith "sing" "Writing's on the Wall" I think you'd agree we were all losers. As I said to Mike, the writing might be on the wall, but the notes to this song are not. He was everywhere. It was a horrid performance - and had his winning been based on that performance alone, he'd have been a loser.

Yes, there are exclamation points there, but I really wasn't gloating. Honest.

I feel bad - almost - for snatching the prize from Mike. For a long while he was on his way to a clean sweep. Well, until Sound Mixing. And I pulled ahead with a complete pin-the-tail move on Short Subject Documentary.

I laughed at the makers of Amy - one who said, "all she needed was fans".  Well yeah, that and Narcan - but that didn't happen.

I'll be honest, as the night went on, I wondered if Mad Max would win best pic and director. It cleaned up most other things. And with direction and cinematography I thought maybe the Revenant. I broke the cardinal rule of voting for something I thought should win, other than would win. And yet it paid off with Spotlight. I was very happy that won.

I feel bad for Mark Ruffalo. When they announced best supporting actor, they go "Mark R....." and it turned out to be another Mark R.  That had to suck.

...not as much as Stacy Dash and her bomb of an appearance sucked (and the Star Wars thing fell flat!), but still.....

And Mike may not have won the competition, but he's won my friendship - - and isn't that more important?

Congratulations, Blobby - though I would actually have preferred to have been second if the consolation prize had been all those lovely doggie kisses.

I'm okay with Star Wars but every time the academy uses those robots, or cartoon characters, as part of the show, it's a huge miss.

Not as big as the Dash miss; that was epic in it's awkwardness.

Congrats on the win!!! <<<exclamation points

How do y'all do so well in guessing the winners? All in all you both do very well. Congrats, I think you should get a tiara.

OK Mike here..i'd leave a longer comment but i've got cookies to back.
Let's see...a nice peanut-based treat, me thinks.
Let me say congrats to the Oscar master -- all hail Blobby.
You won fair and square....but i don't have to be happy about it. i'm up to my eyelids in flour and baking powder. AND this is the second year in a row i'm baking for you.
Harumph