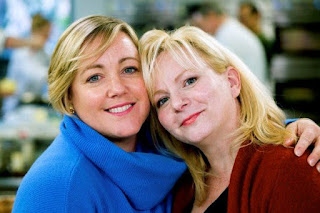 I mentioned a little while ago that Christopher Kimball was out at Cook's Country / America's Test Kitchen.

As I said, depending on the story, he was ousted or quit. Still it was a show he developed and then sold out to a corporation, as he apparently did give a damn about the greenback, a dollar.

It's just that that corporation affiliation came to bite him on the ass.

That was a dish the test kitchen did not work all the kinks out of, apparently. And it was served cold!

So, the big question of the day - well a month ago, until I promptly forgot about it - was who would take over hosting duties? I never saw Kimball pick up more than a pair of tongs to help one of the chefs turn a chop. I am unsure of if he could actually cook at all.

I mean, I knew the host wouldn't be the dour one - whose name I cannot remember, and I'm guessing no one else can either. Becky is way way WAY too perky. Dan and Bryan are cute in their own way, but have made far too few appearances to qualify for the job.

That left Julia and Bridget - that is assuming the show hired from within.

If you recall, I've back storied an entire thing where I believe the two absolutely loathe each other. At the time of the firing / quitting, I told 710 it would be a cage-match to see who got the job and who joined Kimball on the unemployment line.

Two days ago, 710 forwarded me an email he got from America's Test Kitchen - because he subscribes, dontcha know - and he gleefully holds up the email with an image of the two new CO-hosts.

He so wanted to prove me wrong with my fiction.

I looked at it for 0.08 seconds, look back to what I was doing and go: "it's photoshopped".

I think this will be good. Honestly, I never liked Kimball all that much. I always thought he seemed a little too superior to all the others (especially in the blind taste testing).