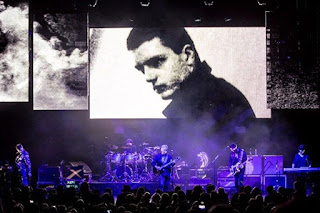 Two days ago, I got a text from my friend Tony.

You might remember him as my meth friend. Hopefully former meth / current friend, but to be honest, I don't know and I didn't ask.

Tony has made some life changes; left a shitty shitty job, sold his house in Los Angeles and relocated to his home town of Las Vegas. I'm not sure that does much for potential drug usage, but he's closer to his immediate family, so maybe that is an impetus to quit.....or at least cut back.

Anyhoo - I actually had not heard from him in months, so I reached out, just to ask him if he was going to see New Order, as they were playing in Vegas this last week.  I got crickets. At least for a few days. Maybe he was on a bender.

No.  That's not true. His surpasses mine by far, which is a little amazing as he is almost 10 years my junior. I'm not even sure the '80s was his time. I wasn't surprised to hear that he got tickets and was going to the show. I was jealous.

I so wanted to see New Order. I never have, and let's face it, I'm up there in years. They're up there too. Perhaps this would be the last chance. But a quick look at their tour 'schedule' showed them playing six one-night stands in six cities.

I mean - why bother? It had to cost more to lug over their gear than they'd ever make at the box office. The tickets were pricey but not astronomical - and the venues weren't mega-huge either. Still, I wanted to see them.

My friend Doug tried to get me to come to Chicago to see them, but you know - work. I'm only three months in and it wasn't a weekend show, or I'd have done it in a heart beat.

But Tony texted me out of the blue on Monday, saying his concert buddy cancelled on him and did I want to hop a flight to Vegas. The ticket and lodging would be on him. I just had to be in Vegas by 19:00......that same day (Vegas time).  It was 13:00 my time.

I think I considered it for about 7 minutes. Could I get a flight? It would have to be on time and direct, but I could make it.

But my logical side took over and just said that I appreciated the offer and even the thought, but I could not do it. Though I got him to promise me he'd tell me about it and get some video.

Yesterday, I got about six clips from the concert.


The band sounded good.....more instrumentally than vocally, but I suppose that's to be expected. Visually, it looked like a good show too.

Tony said they played "Your Silent Face" which is a deep cut from their second album, Power, Corruption & Lies.  It sounds like they did a song or two from Joy Division - including the expected, "Love Will Tear Us Apart".

While I knew the band was going to be on Colbert, I missed them and forgot to "tape" it.  Ruckiry (not Jon's boss), the clip is on-line. Again, a strong musical performance and an ok vocal one.

I enjoy New Order meeself, you know being somewhere around your age;-)
I'd have had to decline the invite as well even though from here we have a flight every hour to Vegas that only takes 45 min. Other than life or death emergencies, I just prefer not to move that fast anymore.

I love "Your Silent Face"! I've even come up with a music video concept. Razormaid! did a great remix of it. And of course, it gets a shout out in Bret Easton Ellis' The Rules of Attraction.

I really think "Singularity" would be more enjoyable as an instrumental. Something about the lyrics and vocal timing just seem... off... to me.