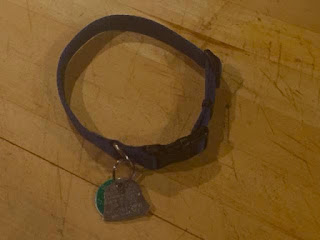 The last thing we did at the vet was take his collar. It had his license on it, and his name was stitched into it.

It's been pretty lonely without him. I still base my mornings and coming home from work on his schedule. I still place things on the stove or the counter in a way that Petey won't be able to reach them.

We finally got to the point to pick up his dog beds and bowl. I still need to wash his pillow, but it still kind of smells of him. I know that sounds weird - trust me, I know.

I had to break the news to my nephew yesterday. I didn't have to, but he asked about Petey. I purposefully held off, as not to upset him his first two weeks at a new job in a new town. He just asked if he went peacefully - and I could honestly say 'yes'.

I'm still learning to overcome my social ineptness too. But a few days after, I did write a note to the vet's office and thanked a half dozen people by name who really gave Petey exceptional care over the last few years. I really think they adored him - and I know they probably fawn over most of their animals, they always seemed to take exception to Mr. Pete.

A few days ago, we got a card from the staff. 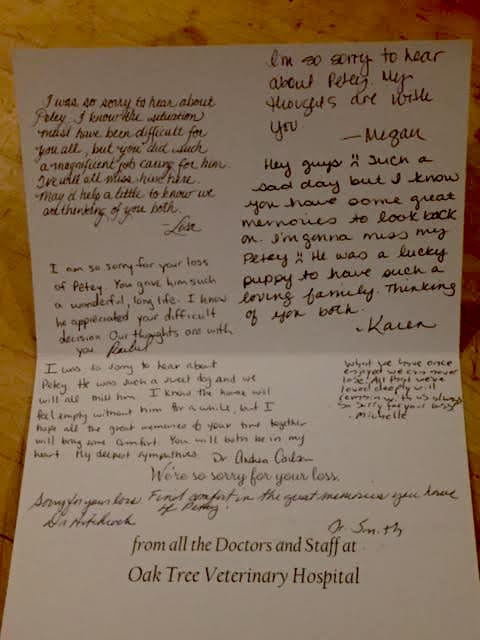 Still I miss the man. In certain ways, I miss sleeping on the sofa with him all night so I could take care of him. I miss his kisses with the softest tongue on earth.

In actuality, after he lost his hearing a few months ago, I stopped really getting kisses. Petey didn't know many commands...........let me rephrase:  he knew many commands and obeyed like three, but one of them was "can I have a kiss?" and he'd do it. Willingly.

It's not easy to get a beagle to do anything willingly - at least when it doesn't include food. After he stopped hearing, I stopped getting kisses on command.

I finally told one neighbor about Petey, but that was only because she asked me if he wanted to walk with them. So maybe the news will trickle through the 'hood.

There have been lots and lots of questions of a new dog. It's not that we haven't thought about it - but not actively. Deep down I know it wouldn't be to replace Petey, but it is still too soon to consider, let alone act on it. Maybe in Autumn.

Song by: the Beautiful South
Posted by Blobby at 12:08 AM

Email ThisBlogThis!Share to TwitterShare to FacebookShare to Pinterest
Labels: Petey

no need for apologies, dear. any furkid parent will tell you that grief/loss takes time to process.

that was a nice card you received from the vet.

please snorgle sophie for me.

For an event that has shaken you to the core, your feelings are perfectly understandable, Blobby. Take your time. You'll always have our sympathies.

You just gotta go with it.
We were watching TV the other night and there was a commercial with a bunch of kids jumping in it. We had a cat, Lady, who did that and both Carlos and I said her name and got teary.
She's been gone about five years.
It's still hard, but you go on and remember all that love.

Oh Blobby -- it's so hard. What a lovely card... I never mind watching Otis when he's under the weather just because i know he depends on us to take care of him. I know you guys went above and beyond taking care of Petey. No doubt he knew how much you loved him.

I have been busy and catching up on blogging friends and just got to you. I love that you love. I'm not being crass when I say that. You gave it and you got it back and that is a super thing.
I send a big hug.
JP

What a lovely post. I am glad to see your surrounded by love here.
Anyone who has lost a pet knows what you two are going through right now.

I have the collars of my late pets as precious treasures.

After an appropriate grieving period I hope you two will consider adopting another dog, a rescue pet or such. New pets never 'replace' old ones; they are memorials rather.