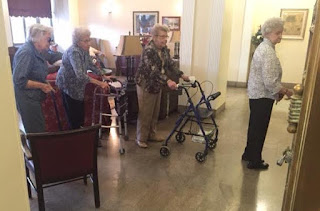 I'm back. Things on the old MacBook Air seem to be fine and dandy.

Anyhoo......last weekend, we went to visit 710's parents. I had not seen them for over a year. I was due. And it was my mother-in-law's birthday.

Jane resides in assisted-living facility. When we visit, somehow we always enter the building through the lower back level and hike the stairs to the third floor. I've only see that back hallway and her room.

So after our first visit of the first day, 710 had to stop in for a few to see his mother. We parked out front and I said I'd wait in the lobby. He said, "you'll fit right in".  I had no idea what he meant.

It turns out it was right after their dinner. The lobby was filled with seniors - and not the high school kind. I was the youngest person in the room by 30 years. And one of only four men. Almost all of the women were off in the adjoining parlour - as if it was the drawing room on Downton Abbey.

I was an observer. I got looks, but no one talked...to me. Actually, most of the women might have chatted, but so low, there was no discerning their conversations. 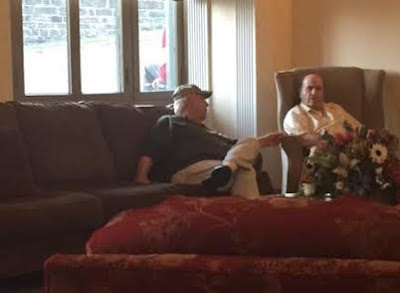 ...plus a guy on the far left, not in the picture.

As I sat and waited for my husband, I listened them talking about stuff. And then an aide passed through the lobby and the man on the sofa said about the guy in the chair, "he's not going to church tomorrow".  When the man in the chair protested, saying he was, the chair guy snapped, "you don't even know where it is!!!".

Mind you, there were two churches  - one across the street, one right next door. If he had turned the other way, he'd have ended up in the river.

Then all of the sudden, all the women decided it was time to go up to their rooms. I loved the cavalcade of walkers and canes. It was kind of sweet.

As I sat and waited (and waited and waited and waited) for 710, I noticed the silence. The men just stopped chatting and the guy in the chair dozed off. The quiet went on for like 20 minutes.  (yes, I waited a long time for that few minute visit to his mom......but I was entertained.)

All of the sudden, the Sofa Guy, turns to the other Chair Guy (not seen) who has yet to say 'boo'. Sofa Guy goes, in no raised voice, mind you: "hey.  hey!  You're an asshole!"

I burst out laughing. There was no helping myself.

I immediately wondered how long was Sofa Guy gestating on something that Chair Guy said or did an hour before.....or possibly 13 years ago. Or if dementia is involved, probably never happened at all.

Just then the elevator doors opened and out pops 710. He just saw my face and knew something was up. I made him sit for a moment to look around the room, so when we got to the car, I could relay my story.

As we walked to the door, Sofa Guy turns towards me, waves and says, "have a nice evening".

bwhahahahaha! but those places are depressing.

I love you. And 710 for knowing there would be a story.