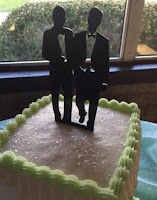 I mentioned we went to Columbus last weekend. And yes, I'm just getting around to chatting about it now.

We went for the wedding reception of Georty.

Yes, just the reception. They had gotten married earlier in the week on their own, which we always knew was the plan. They were smart and got married on their non-gay marriage anniversary date, so unlike 710 and myself, Georty only has one date to remember.

Still, there was a party to be had - which is something we didn't do. I'm kind of regretting that fact now.

710 and I, I believe, traveled the farthest to attend, though only a few out of towners were invited, as Georty didn't want anyone to feel obligated to attend. As if they could keep me away.

Actually, the weekend worked out well for us - meaning 710 and myself. We got to do lunch on Saturday with Georty. Everyone at the wedding. Then separate time with Dith and then Becky and her family. All very spread out and even.

By happenstance, as we walked to Dough Mama on Saturday, we came upon a group of protesters. I wasn't proud asking, nay, begging George and Morty to let me take their picture, as the protest couldn't be any more apropos. 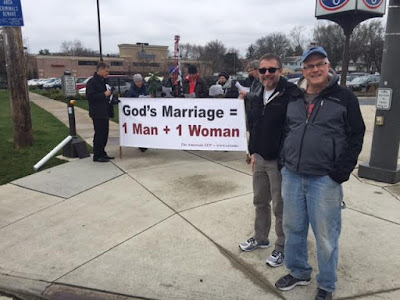 But seriously, almost a year after the Supreme Court ruling, this is still a thing!

Then it was the reception with all - though save our core group, I knew few others. 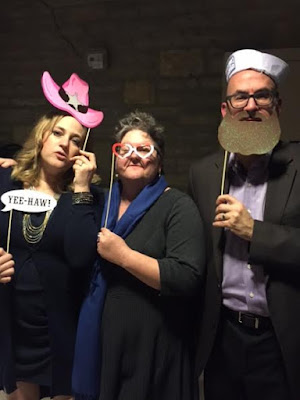 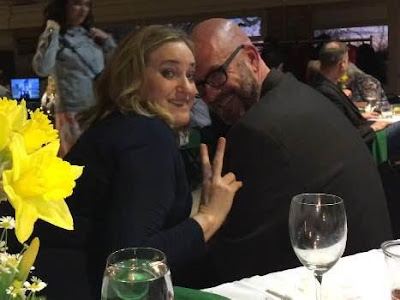 Dith caught Becky and I in a moment. I was sitting across from a humourless, judgemental lesbian. Sure, you could say that's redundant, but this seemed worse than usual. So, I actually had to turn my back to her to talk and have fun with Rebecky.

And of course, there was the happy couple. 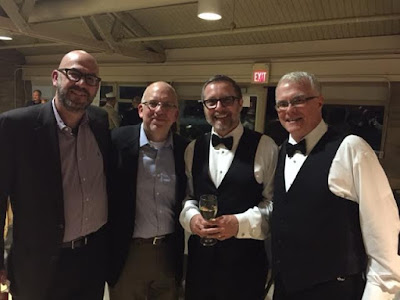 Well.....couples. Friends forever.....and ever....amen. We love Morty and George and were so honored to be in attendance. It was a great night, and no one got too too drunk (meaning: me). 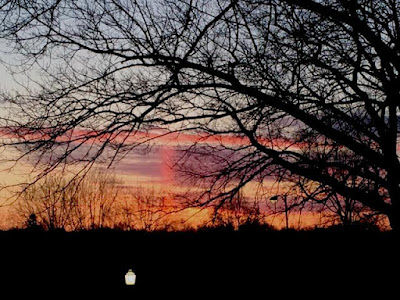 And right after their toasts, I caught the sunset.

George, ever being the educator, told me this was a sun pillar. I know I had never heard the term, and I'm not 100% sure I'd ever seen one. But I liked the shot - and I liked that it presented itself at the reception.

It was a great weekend. Je loved it.

Song by: Echosmith
Posted by Blobby at 12:06 AM

congrats to the newlyweds! and fuck the h8ers!

PS - been a while since we have seen you and 710 in a pix together.

Sounds like a great weekend.
Carlos and I were married on our gayversary because had he needed to remember two days all would have been lost!
As for the haters, i would'a kissed my husband in front of them and then watched their tiny heads explode.

You do make me laugh.
JP

the love in these photos surpass the one sour one.