the Child is Gone 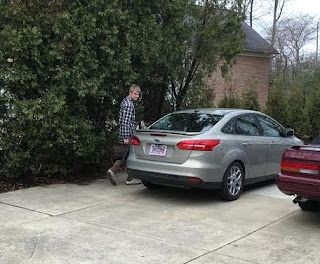 Deep down, I knew it was coming. It was only a matter of time and opportunity.

My nephew, Matt, whom I have tried to model (somewhat) after myself, has up and left home.

He graduated college last May and has been floating around doing a few jobs for his father and working at a local political campaign office for some such state rep. Neither of those thrilled him - though he seemed like a natural to take over his father's business.

Still, Matt longed for new adventures and well, hell, he's 23. That's what your 20s are for.

I love the kid - yes, he's still a kid - and he has big dreams even if his bank account doesn't equal those dreams. Boston was his first choice, but his interviews there did not work out. That's a shame, as I love the town and it would have made it a convenient excuse to head there - and to bug Magic Mike.

So with a few Skype interviews under his belt and one in person interview later, he started  - well as of yesterday - a job in Chicago......the only city colder than Cleveland I'd seriously consider living.

He's 23, so giving advice seems to fall on deaf ears. I watch it slough off like he's made of Teflon. So I parse out my words of "wisdom" sparingly, knowing that the other things your 20s are for are making mistakes and hopefully learning from them.

Matt is going to crash with a high school friend who graduated from Northewestern. Sorry - a high school friend and three of his roommates, none of which Matt has met or vice versa. It sounds like he'll be on the floor or perhaps a futon (another thing your 20s are for, I suppose). I have to believe the apartment is under his friend's name, as Matt didn't seem to need the approval of moving in from the other two.

Don't ask what he's doing exactly - as I don't know. Nor do I know what he's making and if it is sustainable for city living - three roommates or not. It is Chicago, so no matter what, it won't be enough. I do know he gets medical / dental / vision benefits, which you wouldn't think is such a big thing, but so many things he was interviewing for did not offer. He'll save a little money for a few years, as his parents agreed to keep him on their plan until he is 26 (thank you ACA!).

Matt also traded in his very used car for a newer used car. So with whatever fit inside it, he loaded up and headed out at the end of last week.

I wish him well....and it is an excuse to travel to Chicago. He's only a six hours away by car and like 49 minutes by plane. And I have friends in Chicago.....his mother thought it was nice that I had reason to go up, but my rationale was that my friends would help Matt out when (not if) he gets into trouble.

...and yes, that title image, is his last shot right before leaving the state of Ohio.

ah to be young and full of dreams again...I wish your nephew the best!

Chicago is a neat city, I seem to end up there at least once a year.

I got butterflies remembering back to my time in my twenties ... ah, the possibilities!

Yes, I have a God son. Similar age. It terrifies me.
JP