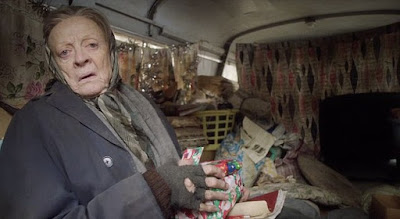 So far, it's been an ok season, but as it turns out, they can't all be winners.

The Lady in the Van, finally came to town - well two weeks ago. But we just got around to seeing it this last weekend. We've seen previews since maybe last October or November.

Metacritic gave it a 70%. Rotten Tomatoes gave it 93%. That's quite a range. In terms of a test, that's C or an A-.  It's safe to say, my percentage is equal to or lower than Metacritic.

First off, there should be laws when it comes to previews. I always expect the trailer to make the movie look better than it actually is, but to make a movie out to be something it's not is completely different.

The preview made Lady in the Van look like a light-hearted comedy about an eccentric woman, but you know what? There is little funny about being homeless, mentally ill, incontinence or having dementia. I suppose it is much more difficult to lure audiences in with that premise.

There were a few lines that made me smile a little, and zero that made me laugh - though for the 27 seconds that James Corden was in it, made it a little better. And Frances de la Tour is always always always welcome. And you never see Dominic Cooper enough, though de la Tour and Cooper were both in the playwright / screenwriter's Allen Bennet's History Boys, which was a play and movie that came off far far better than this.

It's not to say that Maggie Smith and Alex Jennings don't do a good job, but I think the material itself drags them down.....and allegedly Smith played this role on stage back in 1999.

I liked the neighbors - the secondary characters - much more than the main ones.

When it was over, both 710 and I shrugged. We joked that seeing Son of Saul would have provided more laughs.

Perhaps if we went in with a better inkling of the actual movie / subject matter other than the two and one-half minute clip of quips we might have walked out differently.

I thought it was good enough to just make it into my Top 10 films of 2015, but I did have the advantage of having heard a radio version of the original stage play earlier, with Bennett himself playing his own part, so I knew what to expect and wasn't disappointed. (It was, of course, based on what had actually happened in his own life)
On the other hand I also heard on the radio 'The History Boys' with the original theatre and film cast, before the film came out. I didn't care for it that first time. It needed the film to make me appreciate how good the play is.

Btw: Not only are De La Tour and Cooper (as well as Corden) from 'The History Boys' cast in this 'Lady/Van' film, but other (all?) the other boys too, making brief appearances.

Saw the play. Saw the film trailer and they all seemed to be hamming it up. Will give it a miss.
JP

Spouse has been talking about this since hearing an expose on NPR. Glad I read your review so I won't make the mistake of going to see it!