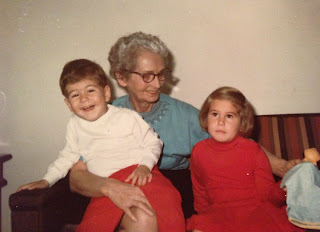 I've written about World AIDS Day for the last five or six years on this day, you might need a break from those.  I certainly do.

December 1st is also my maternal grandmother's birthday. Was. Not "is". Had she not died, she'd be 112 years old today.

I hear more stories about her than I actually knew of her personally, but I always liked her and her husband (who technically wasn't really my grandfather).  My paternal grandmother was a little less....well.....grandmother-y.

Genetics are weird thing. My mother looks so much like my grandmother at this point in her life. And two of my mother's nieces look so much like my mother, it would almost seem she should be their mother - but she's not.

By the way, aren't I frickin' adorable?

When you're 10 and under, you don't really pick up on these things, nor do I remember my grandmother being particularly funny. She was very kind, but back then what did I know from funny?

I can tell you I did not get any sense of humour from my dad's parents. None.

Still, it would have been nice to have gotten to know my mom's mom as an adult. I'm always surprised how many people knew their grandparents. Three of my four were gone before I was 13.  I thought that was the norm - but I'm amazed how many people were in their 20s and 30s before losing theirs.  Granted my parents were married later than normal (well, for the '50s) and I was second to last of the kids, but still....

I'm glad my nieces and nephews are almost all above the age I was when my grandparents died. They know their grandparents - and fairly well.  I never really got that - so maybe I don't know what I missed, if anything.

And just for shits and giggles, here is another of me with my grandmother....along with 2.5 of my sisters and my mother....circa 1966. I was pushing the ripe old age of 3. 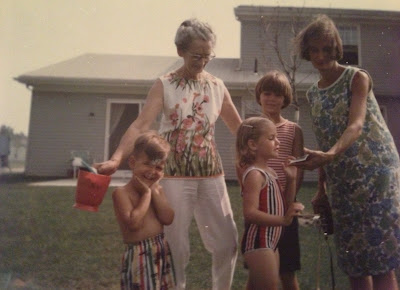 710 loves this picture of me....mainly due my off-the-charts cuteness quotient. ...and it's hard to argue with that.  It is possible he might not like that I shared with the world what I reserved for him. Who can blame him.

Song by: Lyle Lovett
Posted by Blobby at 4:21 AM

Look at all that HAIR!

Have to agree with Jonny - it's obvious.

I knew 3/4. My dad's dad died 25 years before I was born and Grandma never remarried. I did have a great-grandfather for 2.5 years.

That's you in the striped one piece, right?

We have the "that was then" in that bottom picture. I think we need a "this is now" in the same pose. Betcha it's just as cute. :D

yes you are still adorable.

I'm with your buddy on this one. I love the photo of you too.

My paternal grandfather died when I was a year old and his wife died just after my father died, when I was eleven. I did not know my paternal grandmother very well and never really liked her, and well, my mother despised her. After all she was her mother-in-law!

My maternal grandfather died 17 years before I was born, when my mother was just 15. However, my mother's mother was my REAL GRANDMA, lived from just after the Civil War to just after Neil Armstrong walked on the moon, got to hold her two great-grandsons (my boys) and died at age 98. My mother lived to be 87, and now I have reached 70.

Sorry, I bored all of you, but then genealogy runs in my veins!

Your shorts in that second picture remind me of Fruit Stripe Gum for some reason.

Well that was a downer.