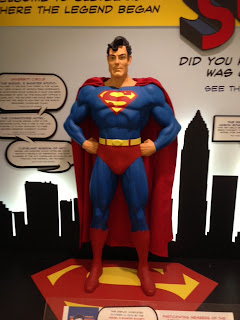 It's just another one of those days / nights.  Little to discuss.

The red-eye wore me out, so did another full day of work after the flight. Though coming home to the family is always fun.

Poor Petey had to wake up just to see me, but he was seemingly thrilled.

So, why the Superman topic?

A permanent Superman display - albeit a cheesy one - resides in the baggage claim area of Cleveland Hopkins Airport.

Why there?  Who the fuck knows.

Cleveland gets a display because the creators of the character were from Cleveland.

There is audio with the display, but to be honest, I needed to get my luggage and shuttle more than I needed to hear about Superman's origin or see his packed crotch.

And what is up with that hair.  Yes, I know Clark Kent's alter ego had that, whatever you call it, hair thing going on, but this looks way bad.  Not bad-ass. Just bad.

The steroided-out body is not helping.  He is just as an unrealistic role model for boys as Barbie is for girls.

But I'm not a comic book guy. This almost unheard of in the gay blog world. I've never bought one, and I'm not sure I've ever read one. I never got the medium.  I don't begrudge those who are into them, but I don't know how it translates from 12 years old to 40-something.  Maybe the storylines are very intricate and deep.

I do know Spiderman in the daily paper is lame, but what can you do with three panels per day.  Mary Worth seems better. Of course, I always go with the Simpsons' Comic Book Guy with that one: "a very rare Mary Worth in which she has advised a friend to commit suicide."

That is a comic I can commit to.

the only comic book I read growing up was MAD magazine.

So the Superman creator is from Cleveland? Really? REALLY?!!! Joe Schuster was born and raised (until 10) in Canada. "Metropolis" was based on Toronto and Clark Kent's newspaper is actually the Toronto Daily Star.

Damn Yankees!! The next thing we know, you'll be claiming that the USA won the War of 1812!

Buddy - regardless of where they were born, they were both living in Cleveland, as residents, when they created the characters. There seems to be no evidence of conjuring up the character while living above the 49th.