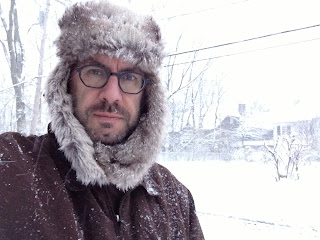 The first truly big snow fall of the year has arrived.

...and because of it, you get to see my new hat sooner than expected.  It's warm.  Like 'make your head sweat even our in 20 degree weather' warm.

Billed as this horrific "blizzard", yesterday's weather was quite annoying, but it would be a huge stretch to call it a blizzard.

I was out and about - and I never felt 30 mph winds, let alone gusts of 45 mph that we predicted.  Perhaps 20 mph earlier in the morning before snow fell, as I was walking the dog. My face was a block of ice before we finished that little outing.

That all said, it still wasn't fun. Last week I mentioned my car out of control on slick roads, but there wasn't tons of snow.  Last night I cleared maybe 5-6" from the drive, but that was after the evening doggie walk.

But ohhhhh, that walk.

For all my sister's talking that Petey doesn't like the cold - he was in hog heaven bounding through the snow yesterday evening. Yes, he pulled, even more than normal.....and once that became problematic, mostly for me.

One pulling pooch + one slick road with ice under the snow = one toppled Blobby.

Je went right down on my "bad" leg....you know the one with all the metal and screws. It wasn't fun.  However, the next two times I fell were even less fun and more right on my tailbone, which I did almost three years ago to the day while cleaning the drive.

To be fair, number 2 and 3 were not because of Petey, it was just poor walking conditions. But that dog have not one ounce of compassion in him.  Where was he with the licks to see if I was ok?  He barely turned around let alone trotted back to check on me. 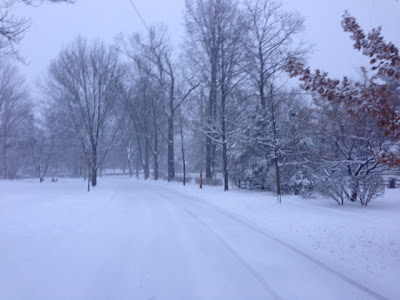 If we get 12" of snow, we would be about one-third of our total snowfall for all of last winter.

It was a night for staying in and making soup - which is what I did.  But more on that after first of the year.  Yes, I already have the rest of my posts for 2012 in draft or completed form.  This one wasn't even supposed to be here, but I felt that Mother Nature deserved a shout-out.

Song by: Great Big Sea
Posted by Blobby at 2:35 AM

LOVE the new hat; it does look warm and frames your face well.

hope you are not in too much pain after falling.

It's the slickness that keeps me from loving the snow. It is pretty at first, but only until you have to go out in it. This is all anecdotal right now, as I write from sunny Sarasota. :D

Darling....it is so you. Do you have the boots to match?

I know this won't illicit empathy, but I really miss snow and blizzards; I felt so good and cozy in them.

Ok, Clumsy McFumbleton! Time to get some Yak Trax!

Do you wear the hat of awesomeness inside with nothing else?