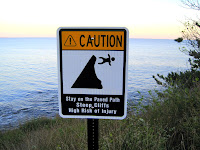 Ok, I have no songs with the word 'cliff' in them.  Who does?

I have a song or two sung by Cliff Richard, but I couldn't really make that stretch. It was too taxing.

I have a feeling, for my reading public, you already guess my stance on the "fiscal cliff" - a term that has been bandied about since before the election and has been in the news each and every day since.

It's not that I don't think the Dems can't find ways to cut some expenses, and I think they have, but clearly the GOP has learned nothing from their defeats of 2012. Their stuck in the mud mentality is well....stuck in the mud.

I get folks who forget history and are doomed to repeat it, but this "history" on what the U.S. citizens want (save the 1%) is only a few weeks old.  It is so not unreasonable to tax the wealthy and close their loopholes. Of course, I'm for taxing religious organizations as well (though in theory, that could blur the line between church and state that has already slid down that slick slick slope).

We are run by a group of morons.

Continually hearing about this has reminded me of some West Wing episodes of fiscal impasse. Art imitates life imitating art.

Song by:  Alanis Morissette
Posted by Blobby at 2:49 AM

Why not Jimmy Cliff?

I like you so I will let you in on a secret. There is no democrat and republican in government anymore. There hasn’t been for a long time. They all serve the same master. The terms democrat and republican now exist to divide people, distract them, and provide the illusion of representation and participation. Do you really think Obama is a democrat? If so what has he done to make you believe he is?

Did he ever take a real stand to raise taxes on the wealthy? No - he never even really tried.

Did he repeal the Patriot Act the first week in office like he promised? No, in fact he expanded it 4 more times granting numerous illegal powers to t he federal government.

Did he bring the troops home? No, in fact while finally ending Iraq he sent most of those soldiers to Afghanistan, and the rest of the ME. Our troop deployment has gone up 14% under Obama.

Did he provide universal health care? No in fact it’s a criminal bill demanding everyone purchase insurance (under penalty of fine) while providing no new hospitals, doctors, or treatments. It’s the same health care we have always had except now the ultra poor who could not have paid their bills must have insurance (how they pay for it nobody knows). This bill is so bad congress themselves have exempted government and their families from it.

Has he been more peaceful or humane? Nope – he has ordered eight times more drone strikes then Bush. He has killed thousands of civilians including hundreds of children around the Middle East and does so every week by videogame. He continues this as we speak. In the meantime law enforcement at home becomes more militaristic.

Obama’s role is to rebrand George Bush policy as cool, progressive…and inevitable. He is to bring the democrats around to a more fascist state of mind. He is a masterful liar and has been groomed for this role for the last 20 years. Americas’ government has become a dictatorship of bankers that is slowly stepping out of the shadows.

"I hold it that a little rebellion now and then is a good thing and as necessary in the political world as storms in the physical....It is a medicine necessary for the sound health of government."-- Thomas Jefferson to James Madison (Jan. 30, 1787)

Sadly, it will never happen. The sheeple are too stupid.