Shame is the Name 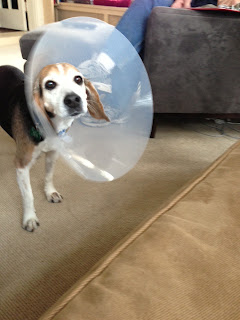 A new home.  ...and since then, he has had an ear infection, his big big bout with pneumonia and now this - a probable fungal infection on his paw.

The pup has just been licking one front paw for about a week, but he's licked it raw.  But the vet says it is some kind of infection that requires topical medicine for the next two weeks.

And that means the Cone of Shame.

I'm not sure Petey has ever worn one, but I am the one who is seemingly traumatized.  Ok, not so seemingly.

Peter just has been banging into things as he navigates his way around the house. He certainly has not figured out to turn his bed over like he is used to. He'd do that mainly with his nose, but that's not going to work.

I watch him resting, his head down and I can't tell if he's truly comfortable or not. But his sleeping noises are certainly amplified. 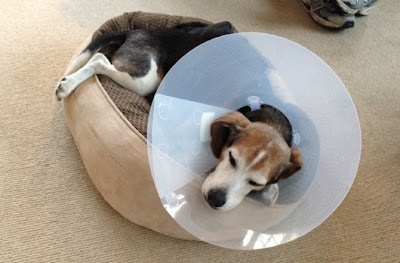 Sophie is certainly curious.  She's not sure what to make of this. Soph follows him mostly everywhere anyway, but now she's looking a little quizzical and keeping her distance a bit.....but just a bit. 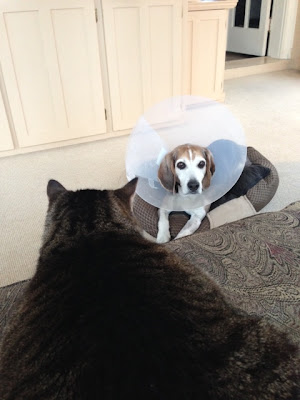 I'm not sure what to think of it either. I feel soooo bad he has to wear this. I don't know how we'll endure two weeks of it.

Today after yoga, I'll hit a pet store and see if there are socks or a bootie he can wear to cover the infected area that he can wear instead of the cone. Yes, I imagine he'll try to take that off, but he's trying with the cone.

In theory, if he's not licking, he doesn't have to wear the Shame Cone. And we'll have to take it off for walks and meals.

Being a parent is hard work.

hope you find a better solution for poor petey!

Poor pup. I hate that our dog's paw still itches and she can't reach it when we collar her. In all these years, we haven't found a way to block those allergies.

I love that shot of Sophie keeping an eye on Petey. Have they become friends yet?

I'm sure he'll be fine... and be back to his normal self soon enough.

He'll do just fine in the cone. He's playing you like a cheap violin (says the man who hasn't been able to get the beagles off the bed and back in their crates after the last conehead episode).

indeed - it's hard but oh so rewarding. I am still glad you have each other.

He is so adorable. We took Georgie to the kennel today. GUILT. But noone wants to watch him for three weeks.