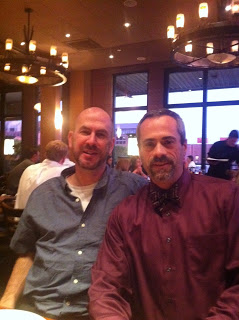 I'd venture to say - not very.

While I've done many a thing that make him Spo, I've done most on a trial basis not as a way of living or even liking (i.e. opera, bourbon).

The bigger question is: should anyone else be like Spo?  Or should we be as individual as each of his handmade shirts?

If we were all like one another, where is the fun in that?

Still, I'm nothing if not a follower and I will do this meme. My answers won't be clever enough for a win (whatever that looks like), but you get what you get.


Tea, wine, or champagne?
Wine. Red preferably, but I'm not that horribly picky.
How left handed are you?
Eat. Write. Play Guitar. ...and one other thing. While that's only four things, everything else is via the right hand, yet I consider myself a lefty.
The loudest item of clothing I have …………..
Please! All my clothing items are tasteful. I have a few purple dress shirts, but they aren't "loud".
The Best Friend: who is s/he?
Unfair question. I don't have only one. We're a collective. ..and then there's my husband too. But I have many great friends. None I'd single out as 'best', as what does that mean? There is also no best song, movie or book either. Each can be exceptional in their own way.  ...and no, this isn't a cop-out answer.
I’d rather eat rats in Tewkesbury than……
Figure out what that is supposed to mean.
How many of these have you done?:
1. Been to an opera
Yes. Professional and Non.
2. Read a novel by Dickens
Many. A Tale of Two Cities. Bleak House. Great Expectations.  Oddly never read A Christmas Carol or Oliver Twist - though i've seen adaptations.
3. Drank Bourbon
A few times. Not a fan.
4. Been to Key West
Four times. Each time has been less gay than the last - even with me being there. Or maybe because I was there.
5. Visited The Stratford Festival of Canada
Not knowingly.
6. Spiders give you the heebie-jeebies.
Well, that kind of depends on the size of the spider  and how hairy it is - doesn't it?
7. Been to Michigan
Many a-time.  Mostly for college football games. Though once to see Annie Lennox and once to Sagatuck.
8. Rolled down a grass hill.
Um...when I was 8.
9. Ate Synder Pretzels
Yes.
10. Used the word ‘rubbish” in the past 30 days.
None. zero times.
11. Worn a bow tie
Without a tuxedo?  Never.
12. Have a set of Viking horns
I don't have that much disposable income.

"should anyone else be like Spo? Or should we be as individual as each of his handmade shirts?" - I vote for the shirts!

I remember this photo: it is a fond memory for me, meeting you. I hope to have a 2nd meeting soon. I'll even bring you some viking horns if you wish.

And one other thing. Snicker.

I'm way behind on reading. I didn't even know Spo did a meme.

And as for the "one other thing"... do you never switch off?