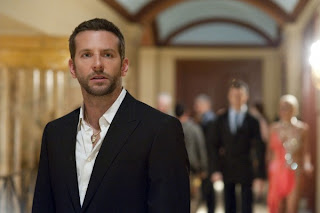 Sunday we saw Silver Lining Playbook, which completes for our annual goal for 2012.

That is two years in a row, if anyone is counting.  I know I am.  I have to, since we struggle to get to this number year after year and until last year, have failed.

...and we still have two more weeks to go, so we might surpass it.  I'm sure we'll surpass it....as some people want to go see Les Mis on xmas day (even though CNN gave it a "C"). Oh yes, "the gays" the neighbors want to see that opening day.

Once again, I read no reviews of Silver Lining Playbook prior to going to the movie, but it was hard to miss some trailers as we saw films over the last 2-3 months.

I would say the movie camera loves Bradley Cooper - he is fun to look at. And I've said it before, but the moving camera is more forgiving to him than still pictures. But that means nothing if he can't pull of the act - and he does.  While I like him, I can't say I liked his character that much, but I'm not sure you're supposed to.

Some performances, again while I may not have liked, were better than others (the lady playing Bradley's mom). I'm still trying to figure out the appeal of Robert DeNiro. He had two good scenes here and other than that.........meh. I find that with most everything he does.  Clearly, I'm in the minority with him. I think Scorsese milked 2-3 good movies out of him and he's seen as a legend, deserved or not.  To me, he's like Pacino, playing off characters he's already done till he become almost a parody of himself.

And Chris Tucker? Was there no other black actor in Hollywood available?  NONE?

Was Malcom-Jamal Warner really not sitting by the phone waiting for a call - any call?  Tucker is a one-note hack and not even talented at that single note.  Maybe he's genius when acting next to Jackie Chan, but who wouldn't be?   I suppose I shouldn't care considering when you add up his screen time it was 6.5 minutes.

I hear the word about Cooper possibly getting nominated for an Oscar (are you listening Mike?) and I thought he did a good job, but Oscar caliber?  But then I remember Robin Williams has one, and Halle Berry.....and Miro Sorvino.  The Academy just hands them out to just about anyone, so Cooper has a good a shot as anyone.

Actually, I was ok seeing this movie. It was on the list and I wasn't fighting to get into the Hobbit opening weekend. I assume we can see that before year's end.........or we can extend that into next year to start counting down the 2013 movies.

I keep saying it, but Lincoln is still on my list and I want to see This is 40 since I'm already looking at that in the rearview mirror. If both of those stick around past the holidays (and they will), I can get a good jump on the next year's goal.


....and yes, I used this title before, but it seemed tailor made for this, dontcha think?

Your evaluation of DeNiro is right on. I'm glad someone finally said it.

PHILLY MOVIE (star AND location)! spouse also had good things to say about this one.

he wants to see lincoln and 40 too. I will hold out for fdr.

We saw it last week. Serge figured it out from the beginning as he often does. Hate that. I would have preferred less drama and more comedy, or vice versa, it had an Ordinary People quality to it, and also a Meet the Parents quality. Yes, he is kind on the eyes too.