Bullets in My Hairdo 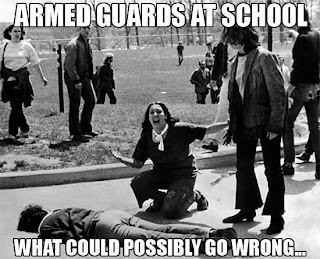 Time and again, I've made no secret of my shock and awe at the NRA and specifically Wayne LaPierre.

Yes, I'm kind of late to this, but there were holiday posts and things to attend to.  I suppose if I posted multiple times per day, I could get everything in. As you might not yet notice, so far I haven't gotten in my Record of the Month posts, my App of the Month, Site of the Month, etc.

This isn't a bad thing, it just means I don't always need placeholders and I have things to babble on about.

Back to the NRA.

Here is what good armed guards would do at each and every school: job creation.  At least in theory.

125,000 schools nationwide.  Of couse, now already over-strapped school systems will have to lay off teachers to pay for this initiative, along with benefits and supplies (you know: guns, bullets, vests).  The  good thing is, no one has to shell out tax dollars for background checks, licenses or training. None needed!

I'm sure the teacher's unions (or the teachers themselves) won't balk that the average armed guard will get double an educator's salary, since the same people who rally behind the NRA (the GOP) already want teachers to sacrifice and take pay cuts.

Logistically, an armed guard ratio could be solved via a math word problem, no?

Q: If a school has 10 exits, 6 stairwells, 40 classrooms and 400 hundred students, and a shooter has four assault rifles each with a magazine of 1000 rounds of ammunition - how many guards would be needed to kill the shooter?

Extra Credit:  how many students would the shooter kill before the guard(s) got to him?

Speaking of idiots, don't even get me started on the responses I got back from my republican state senator, Rob Portman.  Frustrating, but not surprising.  ....nor was it surprising that a wuss like him was on the short list for Romney's VP.


Song by: Finn Brothers
Posted by Blobby at 4:24 AM

I learned yesterday that Columbine had not one, but two armed guards. Each took shots at Harris and each missed. Then Harris and the other shooter went to the library where the majority of killings took place. So much for armed guards.

You can say that again.