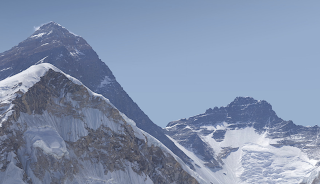 I have mentioned, more than a few times, that for years, I was just obsessed with Mount Everest. Truth be told, every April and May, I will check news feeds about those ascending Everest.

For those who don't know - normally May 10th (ish) is the best time to summit the world's tallest peak. It's a small window of the "best" weather.  That being in quotes, as the weather still sucks - but sucks slightly less than every other time of year.

There are two ways to climb Everest - the North Face (yes, like the jacket) and then the Southeast Ridge.

If you haven't seen the IMAX movie, Everest, and have the chance, you should see it.

David Breashears was the director of that 1998 film.  He took footage of that shoot along with new images and created a 2 BILLION pixel picture of Everest.

You can toggle around, zoom in (and out) and really see the mountain, the topography and some of those routes I've read about on how people get from Base Camp (go to the bottom of the image and you can see tons of hiker teams camped there!) all the way to the summit.

I know this has a limited appeal, but at least I find it interesting.

On a related note, I cannot wait for the iPhone7 so I can get a 2 billion pixel camera!  I'm sure it will be on that version.

Song by:  Everest Original Soundtrack
Posted by Blobby at 3:09 AM

I just read about this on another blog - I love stuff like this. I was just watching a special and because so many people are climbing the MT now, the traffic jam of all the climbers is now the #1 cause of deaths on the mountain.

That picture is crazy awesome!!