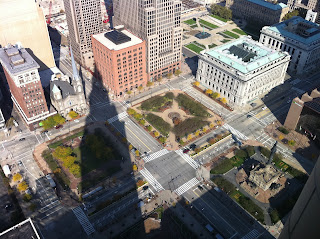 So not only was last Saturday 'flu shot day', my little sister caught me off guard and asked if her three kids could sleep over.

Actually,  my 11 year old niece is the one who called. She duped me by using by her mother's phone.  Trickery.

It wasn't too hard to really take care of them. As it turns out video games, movies and Skype is all two boys and one pre-teen girl need.

Still I won't lie, with not being able to control messes, or situations or schedules annoys the fuck out of me.  Maybe it would be different if they were my kids, but they are not - so I don't have to not be annoyed.

Day 2 was better.  I took them to Dunkin Doughnuts.  Everything is better with chocolate and sprinkles.  Everything.

As I've mentioned here before, 710 is all about "making memories" with the kids, where I'm ok with just "killing time" until I give them back.  I'm a horrible uncle.  They just don't know it yet.

Anyhoo....710 had the idea of going down to Terminal Tower (you can see it's shadow in the title image) and heading up to their observation deck, which has just reopened after decades of being closed down.

The observation space is quite blah.  Four resin chairs and bad tile.....and double hung windows.  Not a problem for the average-heighted person.  For me, the partition came right at my eyesight.  I had to duck to see any real view.  Bother.

But it was a pretty day, clear and blue sky.  But the pictures annoy me since you see the reflection of lights and other windows.  There has to be a better way - no? 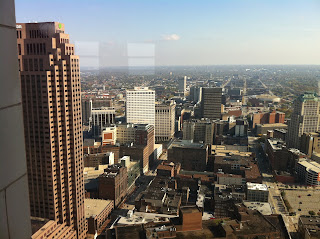 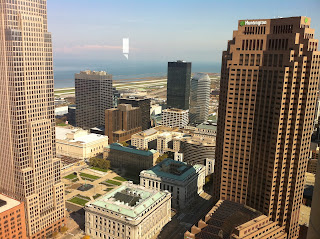 Looking Northeast.  That tall-ish silver builing next to the big black/green monolith building is where I used to work before just doing it from home.  Ahhh....good times. 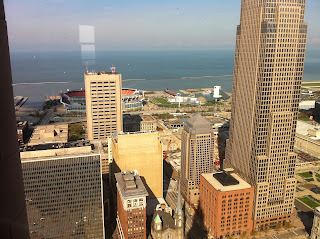 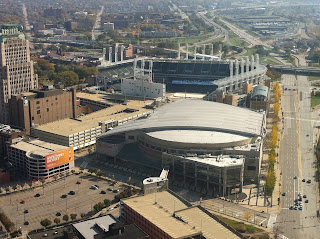 After that we took the kids to lunch, then dropped them home.  We only had them for 20 hours, but it seemed like 20 years.

"...observation deck, which has just reopened after decades of being closed down." I was thinking, how did you ever get up there, and why haven't Greg and I gone up there. But now I know.