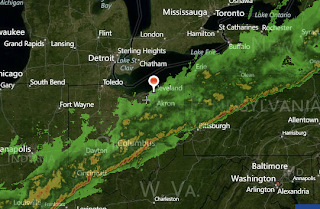 I finally had to just call it and tell them to refund me. Any chance of getting where I was headed was thwarted when I missed the last connecting flight from Chicago.

It was going to be close after the second rescheduled flight to make that connection and my fear was that I'd be stuck in O'Hare for the night and not be able to get home.  I already knew I'd miss my morning meeting if I couldn't get out last night so why bother?

As you can see, Mother Nature was to blame.

But I gotta tell you, I was more annoyed with the gate agents than the weather.  I had to do all the work for them, giving them potential connecting cities to get to my final destination. They had no logical thought process at all.  Then the one just cancelled all my options (cancelled not rescheduled) not bothering to let me there were two other options to get to Chicago.  I finally righted her wrong, but what a hassle.  Don't even get my started on my sopping wet luggage I'm guessing they left on the tarmac.

But after five hours, I headed home. Never made it out of state, let alone to my client.  ...and it slows down my quest by one week to get Platinum status.

My boss was big about the entire thing.  He's going to be there tomorrow and I will not.  I can call in, but it won't be the same - not really.  Still I accept things I cannot change.  Ooooookay.....not really.  I'm not that guy.


Song by:  the Continental Drifters
Posted by Blobby at 7:16 AM

Flying just isn't what it used to be. Nowadays pilots are so cowardly they're afraid to fly through the tiniest bit of rain. Whiny little bitches, all of them.

When I saw the title "The Rain Song" the first thing that popped into my mind was "the Continental Drifters"...:)

ok "anonymous" Are you playing with me? I don't know anyone who has ever heard of the Continental Drifters.

It must be very frustrating to have one's business interrupted by weather.
I suppose it is humbling to remember that mother nature can still do this.

That front stretched from Texas to New York*, and parts of it were really ugly. I would not want to be in a plane when meeting that. Better you stayed safe to fly another day!

*I love my Weather Channel app.

I am playing with you sir. The first thing that popped into my mind was "The Rain Song" by Led Zep.

But Vermilion was a great album. :)